​Those who’ve been isolated at home may be surprised, when they finally get out, at how much downtown Sturgeon Falls has changed over the past weeks. Indeed, King Street has gotten a huge shot of colour from three separate projects, with more still to come.

A bird of hope

Early Friday, the large north-facing wall of the Tribune building became the blank canvas for the internationally renowned graffiti artist Mique Michelle. Mique, also known as Dominique Boisvenue, grew up in Field where her parents still reside, and keeps close ties with the community. While her work brings her all over the world, painting across Canada, the US, South America, Europe and Africa, she has a soft spot for West Nipissing and wanted to bring a message of courage and hope to the area in light of COVID-19 and the recent loss of several community members.

Mique is also impressed with Gayle Primeau and her local beautification committee, whose efforts have vastly improved the downtown core over the past few years. The artist worked with Primeau on a mural at the Candice Keto Kitchen building on King Street a couple of years ago, and the two always kept in touch. “We knew we wanted to do another project together,” says Gayle, who has now coordinated six murals so far – all on a volunteer basis.

“I find it incredible what she does. It builds pride and a sense of ownership in the community. It reminds me of when I grew up here, that sense of community. My West Nipissing is Une canne ça dépanne [food drive], it’s beautification, it’s Monsieur Lachance…”
​ 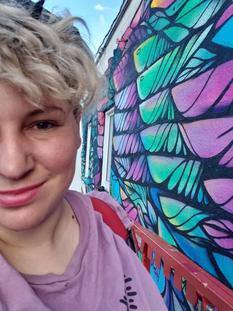 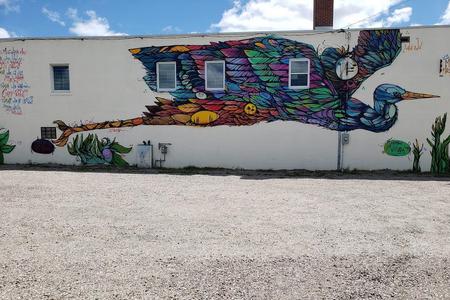 World-renowned graffiti artist Mique Michelle (Dominique Boisvenue) was back in West Nipissing this past weekend to paint a giant “bird of hope” on the Tribune’s north-facing wall in downtown Sturgeon Falls. The project was a collaboration with the Sturgeon Falls Beautification committee, led by Gayle Primeau, who coordinated the initiative and has more improvements planned for the area.