Reggie Leach signs the WN Sports Hall of Fame window he accidentally smashed with his trademark slap shot during his first game of the WN Old Timers hockey tournament. The former NHL star and Stanley Cup winner was a great addition to the roster this year, delighting local fans with stories and hockey lore. 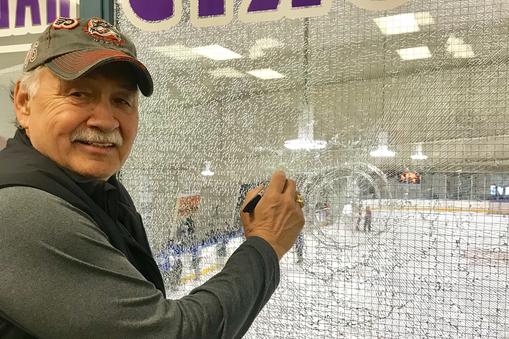 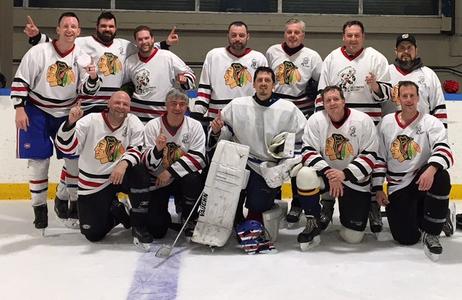 It was a fun-filled weekend of bonding and bragging, friends competing on ice and then catching up off ice, as 13 teams faced off at the annual Sturgeon Falls Old Timers Fun Weekend hockey tournament April 5-7. This year was extra exciting as a special guest player joined one of the ‘Super Old Timers’ teams – former NFL great and Stanley Cup winner Reggie Leach, who even left his mark at the arena.

The event was split into three categories, one for regular participants of the SF Old Timers league, with players aged 35 and up forming five teams; one for female players, which included four teams of players from North Bay to Sudbury; and finally the Super Old Timers, aged 55 and up, who had two local teams and two visiting teams.

SF Old Timers League executive members Peter Ming, Shawn Lavigne, Michael Dupuis, Cory and Eric Simard explained that the teams are reformed every year to ensure a fair distribution of talent, and “the focus is just to have fun.” Members Dan Gagné was in a game during the interview and president Marc Cuillerier had to sit out for the first time ever. “There was a family wedding and he had to decide whether to come here or get a divorce,” joked Dupuis.

“All season we play together, we don’t keep track of standings, we just have fun. The tournament is an opportunity to ratch it up a notch,” said Dupuis. While there is plenty of good-natured ribbing and bragging, there is no cup or trophy on the line.

It reflects the purpose of the league itself. “We get to meet people and get exercise,” noted Dupuis, while Simard added that they recruit players of all skill levels, even some who have never played before.

The men noted that the ‘Super Old Timers’, who usually play every Tuesday morning during the regular season, have players in their late 70’s. They even include two WN Sports Hall of Fame members, Mike Penasse and Edgar Gagné, and Old Timers League founder Larry Michaud. Michaud, now 77, says he founded the Old Timers in 1990-91, played with them for 21 years, then “graduated” to the Super Old Timers. 76-year old Gagné brought his grandson to watch on Saturday, and the youngster said his grandfather still had the moves!

‘Old Timers’ still got the moves