53 years of friendship, laughs and love 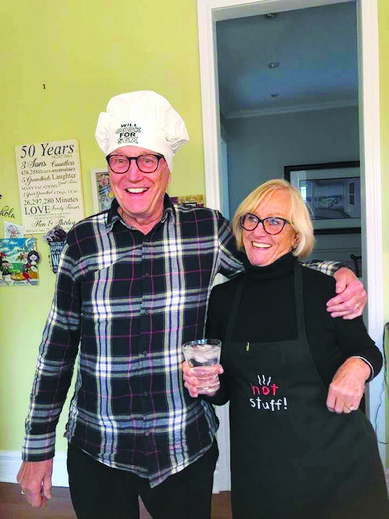 In the season of love, it’s nice to reflect on a love that has been seasoned. The Perrins, Ken and Shirley, will be celebrating their 53rd year of marriage this year. This couple is well known to residents of West Nipissing because of their personal and combined contributions to community life. Shirley came to prominence when she took on the challenge of organizing the Relay for Life [cancer walk], while Ken took on the challenge of revitalizing the West Nipissing Food Bank and started a Food Rescue program. Of course, there were many volunteers involved and they didn’t do these acts of goodwill alone, or to gain prominence. They were just spreading their love around, like butter on hot toast. Oh yes, Shirley loves to cook and garden, and Ken likes to eat and walk the dogs. And both of them love being part of community life, even under the rigours of imposed isolation because of COVID-19.

The couple met when they were quite young. Shirley recounts, “Ken was my neighbour in Kitchener. He just moved in to live with his aunt because they had a fire in their home in Callander, so he needed to get out and make some money, being from a family with 11 kids. He had to help his family. That’s where I met him; he was my next-door neighbour. I was 18 or 19.” Ken adds, “I was just a few months older than her.”

Shirley says, “We had lots of conversations looking out the bathroom window. Actually it started out as just a friendship, to be honest. It was strictly a friendship.” At which point Ken cracks a risqué joke, making Shirley laugh. “Ken just hit the nail – the thing that has been prominent in our relationship is humour… a lot of it!”
​
... to read more, click here.