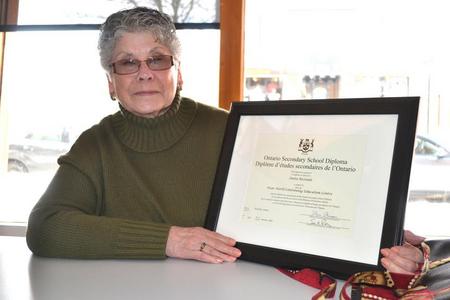 Anita Restoule is working down her bucket list, and recently the 77-year-old resident of Sturgeon Falls has crossed off her major ‘wanna-do’. She graduated with her Ontario Secondary School Diploma this past February. The achievement has her glowing. “I did want to get that certificate,” she says. “It was something I hadn’t finished. It’s like you start a quilt, it’s always there – I haven’t finished this yet. Last year it just hit me. Even though I’m healthy, the calendar on the wall was telling me my season is not forever… It was on my bucket list and it was the hardest thing I had to do, so I started there.”

Her educational background is familiar for a lot of people in her age group. “It’s the same old story as other people,” she relates. “We were 8 kids at home and not enough money after the mill closed. I’m the oldest. The boys quit school earlier than I did – I guess it was expected of the boys. One of my brothers has only Grade 8.”

Anita finished her Grade 9 and started Grade 10 in the fall. The way she tells it, one of the cashiers at the IGA quit in November, so Anita applied and got the job. She was 15 years old. “That was old then. When I was eleven I had to keep care of four kids.”

A younger generation may have a hard time getting around the concept that if you wanted something, you might have to make tough life decisions at a very young age. “If I wanted decent clothes, my glasses changed once in awhile, it had to be done. I didn’t resent it. There were a lot of people like us. A lot finished their education, but a lot didn’t.”