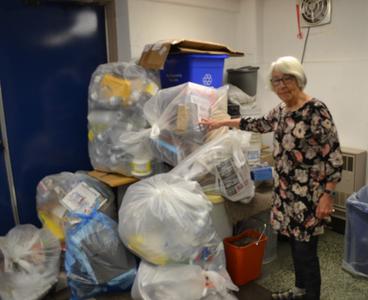 There are a lot of plastics in local blue boxes that cannot, in fact, be recycled, and Thérèse Boivin of Sturgeon Falls wants to correct that. Putting the wrong kind of plastics into the blue box program requires extra sorting by staff, and thus slows down the process and reduces revenues, costing everyone extra tax dollars. Boivin, who lives in the West Nipissing Centre retirement community, has taken the initiative to help her fellow residents clearly understand what goes into the blue box, and what doesn’t. She’s making posters for different areas in the building to illustrate the difference between recyclable plastics and the non-recyclables. The 82-year-old says she’s not an activist, and she doesn’t want a soapbox, she just wants to aide the process and decided to do something about it.

Opening the door to the recycling facility on the main floor of the 4-storey building, she says, “This is where they separate the stuff, and the garbage goes in there too. The guy that works here picks up from all the floors… [Residents] put waste into some of the containers, but there are things they put in that shouldn’t go there. I’m trying to get the stuff that doesn’t go in there out… They put in milk cartons all the time, and juice cartons, and these don’t go in because they are waxed.”

Boivin recently read about the WN recycling process, saw the mistakes being made in her own building, and called Jason Sullivan, manager of WN Environmental Services, to consult with him on how to improve things. “I’ve always been interested in the environment, for many years, and when the article came out in the Tribune, it pushed me to think about doing something… I have faith that if people know what they can recycle, they will do it. But to think all plastic goes in; it’s not true. I thought to make lists and laminate them and put them on the doors of recycling places. …That’s why I wanted to see Jason [Sullivan]. I had some things [on the list] that shouldn’t be there and some that should be put in. I’m making it in French and English, and then I will put the non-recyclables in red so they will see it.”

Boivin was herself surprised at some of the things that do not go into recycling. “Metal - I thought the mason jar covers, but they don’t go in! The plastic containers when you buy tomato plants – non-recyclable! Dishes, glasses to drink, made out of glass – non-recyclable. It’s just the jars that are recyclable, containing olives, whatever. I guess the glass is tempered differently maybe? I don’t know.” What Boivin does know is that inefficient recycling costs everyone. “Recycling properly saves money; it’s not so labour intensive and saves on tax dollars and everybody benefits.”