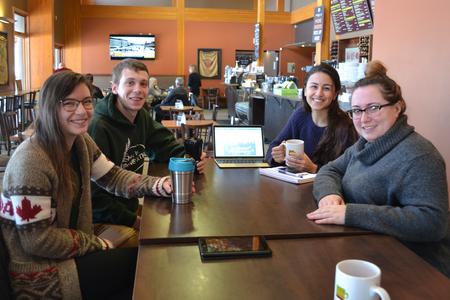 Manon Arcand left West Nipissing to study and travel the world, but she came back inspired with a vision to help clean the environment through awareness and collaboration. The 29-year old Cache Bay native launched the West Nipissing Green Initiative, and she wants everyone to get on board.

After studying International Business in Ottawa, Arcand was hired by a large consulting firm, but quit that endeavour to spend some time traveling. “I quit and went backpacking and my love for travel started… It led me to freelancing in project management for the public sector. In 2018, I spent the year in Asia travelling - living in a small island in the Philippines.”

It was while living on that island that she became inspired. As she tells it, on that island the children did not want to attend school – they wanted to surf all day. The problem was that they didn’t have surfboards and they didn’t know how to surf. “There was a couple on the island, good surfers, who wanted to do something about it, but had no money or resources – no government grants there.” She relates that the couple gathered and repaired broken surf boards and worked with local schools to strike a deal with the children. “If you go to school every day, Monday to Friday, the teacher will give you a token; if you give this token to us, we’ll teach you how to surf and provide a surfboard for free. The next day all the kids were in school – it worked instantly. On the weekends, you would see the children all ready to go surfing.”

Janique Rivard, Kristopher Rivard, Manon Arcand and Émelie Keenan held their initial meeting this Monday, January 20, to begin organizing and planning for L›Initiative verte West Nipissing Green Initiative projects. The group plans on tackling issues around single use plastic in West Nipissing, and is inviting everyone who is concerned about preserving and enhancing the local environment to join them in raising awareness and developing solutions.The Animal Planet film crew, including (shown) director Karen Yarovsky and director of photography Stefan Randstrom, came to Sturgeon Falls to shoot a segment for their Collar of Duty television show, to feature Marcel Martel and his service dog Teigan. The two are being filmed here at Leisure Farms.

A green vision for WN