On International Women’s Day, we honour individuals who have raised the status of women, thereby elevating the lives of all people through a heightened awareness of equality. Muriel Sawyer, Deputy Chief of Nipissing First Nation, worked tirelessly and diligently throughout her life to revive the Nishnaabemwin language and culture of her people - a language and culture that were debased and relegated to obscurity by a colonial system that strived to eradicate the distinctiveness and value of an entire people. All her life, Muriel laboured to reinvigorate a language that held, embedded within it, the honour of women.

When she died on February 6, 2021, it sent shock waves throughout the community of Nipissing First Nation, a shock wave that reverberated throughout the extended family of Ontario’s indigenous nations. The loss of her indomitable spirit was also felt by the provincial educational system, which she has profoundly changed by her contributions.

Muriel Sawyer, born to Emelda Commanda Marshall in 1951, lived through dark times of prejudice and outright racism. Today, we share the sorrow of our neighbours and friends of Nipissing First Nation at the loss of a woman of remarkable distinction.

Muriel Sawyer sat on the NFN council as Deputy Chief to Chief Scott McLeod, and alongside her only child, Michael “Mike” Sawyer, who is also a councillor. Nobody knew how ill Muriel was, as she wished to keep it private. Mike and his wife Monique lived together with Muriel, and her former husband John Sawyer was also part of the loop.

“We kept our circle pretty small because [the cancer] was treatable; she didn’t want people to know, she wanted to maintain the normalcy,” says Mike.

“My mom wanted people to know she spoke her language up until about 10 years old. She had to learn English as a second language. She was very fortunate in speaking her language; she was one of the lucky ones that didn’t have to go to residential school because her grandmother kept her away from the threats of residential school. Given the situation in Nipissing and Dokis, a lot had camps on the French River and a lot of the Indian Agents didn’t have access out there.”

Some families would send their children back in the bush when it was known that the authorities were about to make a visit. 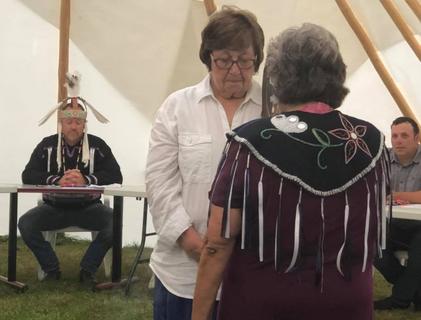