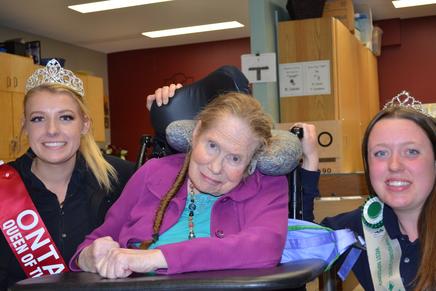 When Derika Nauta, the 2019 Ontario Queen of the Furrow, came to visit West Nipissing June 12 to 15, she and Zoë Dauphinais, the West Nipissing Queen, took time from their busy schedule to visit with Anne Spaull, the 1959 Ontario Dairy Queen, on the Sunday afternoon. Anne Spaull of Warren, a lifelong resident of the area and a former dairy farmer, currently resides at the Long Term Care Unit of the West Nipissing General Hospital. She is also an honorary member of the West Nipissing Queen of The Furrow committee. Spaull was the last Dairy Queen in Ontario, as the title was changed to Princess the following year. It was quite a moving get-together for everyone involved, including Jovette Cazabon Beaudry and Janet Parsons, two ladies who sit on the IPM 2019 committee overseeing the Queen of the Furrow competition.

Anne Spaull, currently confined to a wheelchair, was elegantly dressed in the 2019 IPM colours, greeting her visitors with a generous smile and sparkling eyes, maintaining the grace of a queen to this day. The small group had an opportunity to reminisce. With the assistance of longtime friend Janet Parsons, Spaull shared that in her early days as a dairy farmer, she milked 25 cows. Her grandparents started the El Carmen Farm in Warren in 1912, breeding horses, shorthorns and sheep. Spaull’s parents took over the farm in 1935, milked by hand and shipped cream. In 1936, they installed a gas-operated generator to run a 2-unit milking machine and put a whole can of milk on the train to Sudbury. They began buying Ayrshires, and following WW2, pioneered the switch to tractors, balers and combines in the Warren farming community. At one time the farm was the largest operation in the area, with 250 head, half Ayrshires and half a variety of European beef breeds.

Anne Spaull’s ambition from childhood was to be a farmer and breeder herself. After seven years of schooling in England, and some downhill ski racing in Switzerland, she returned to the area and took over a breeding program. It was at this time she won the Dairy Queen competition.

Spaull followed in her father’s footsteps. She became very active in the Milk Producers’ League and the Farm Safety Council, and was the first female director on the Ontario Association of Agricultural Societies, and possibly the first female president of Ayshire Ontario in the early 1960s. She also spent 20 years, on and off, serving on Warren municipal council, was secretary of the Golden Age Club and a member of the Warren Lions Club. She and her husband Ejnar took over the farm in 1989. Their crowning achievement was the production of an outstanding Ayshire herd, with heifers going to farms across the USA and Canada.

A meeting of Queens

This photo from Ontario Archives shows, from left to right, Marjorie Watson, the 1959 Dairy Queen of England and Wales, Premier of Ontario Leslie Frost, and Anne Spaull, 1959 Ontario Dairy Queen. Anne Spaull, who had a dairy farm in Markstay-Warren, currently resides at the Long Term Care Unit of the West Nipissing General Hospital. 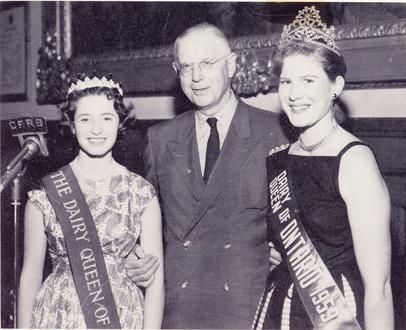