​When the new street lamps in Sturgeon Falls were officially switched on, it represented another milestone for Gayle Primeau and the Sturgeon Falls Beautification Committee. Mayor Joanne Savage made a celebration of it on January 30, hosting an official lighting event in front of the downtown fountain, with around 20 people attending. As the 15 coach-style lampposts erected on King Street, between Front and William, were lit up, the effect was transformational.

Mayor Savage related that an unexpected windfall of $50.3K in provincial funding was awarded to the town for downtown revitalization, and the WN Chamber of Commerce and the Beautification Committee came up with the plan. The town also kicked in $73.9K to get the project completed to William Street. Savage noted that each of the light standards also has extensions to hold banners, which will be added later.

“I’m very grateful for the community partners that came forward,” expressed the mayor. Chamber president Joanne Vallière also commented that her organization did the planning, the budgeting, filling out the applications. “Putting a team together, getting volunteer groups to help out …It’s a good example for residents and business people. Merchants are cleaning their storefronts; residents are cleaning their yards.” She noted the Beautification Committee headed by Primeau brought the idea forward, and local contractors were used to install the lampposts. “Thank you Gayle, and Luc Charles Electrical, and Deep Construction,” Vallière expressed, noting that merchants, residents, the municipal Public Works department all worked together to make it happen.

A spotlight on downtown improvements 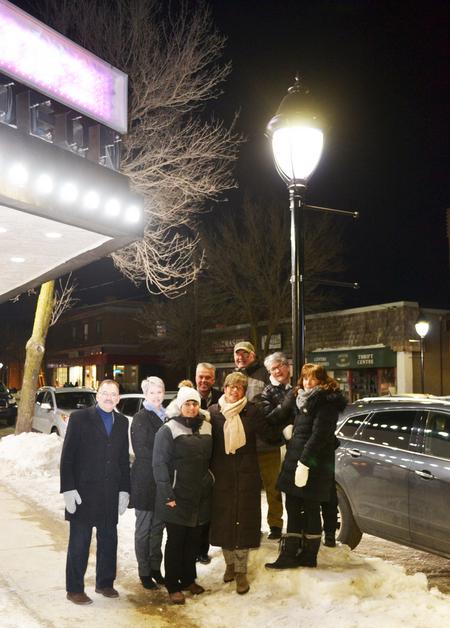