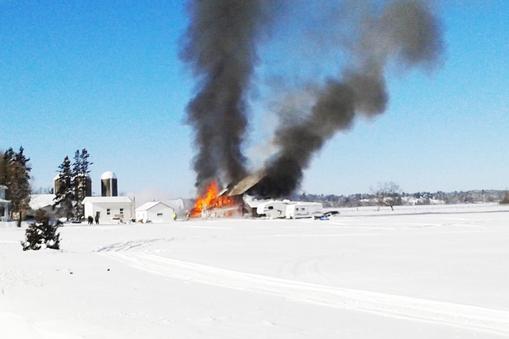 The New Year began on a sad note for a Verner family as a fire tore through their barn and left several animals dead.

The barn fire at 347, Leclair Rd. in Verner was called into the WN Fire Service on Friday, January 6, at 11.24 am. Despite quick action, the fire completely destroyed the barn that housed several animals, all of which perished in the flame. Mike Desormiers, Fire Prevention Officer / Training Officer with the WN Fire Service, said it took approximately 4 ½ hours to quell the fire in sub-zero temperatures (-20C), and the barn was already too involved to save the animals – who were more like family pets.

“Emile Warrington and Tina Dauphinais are the owners. It’s not a working farm, more a hobby farm. Two pigs, two goats and a calf all perished in the fire. It was mostly pets, more than anything. The young lady, Zoée (Dauphinais) took it very hard,” he explained.