Sturgeon Falls turned into Hollywood North again last week, as another film crew was in town to shoot some scenes. Several roads were closed July 2nd to accommodate crews working on the movie “Like A House On Fire”. Stewart Road was closed during the day for a few hours and Queen Street between Michaud and River was closed for a couple of hours in the evening. The movie, which is primarily being filmed in North Bay, is a Quebec-Ontario co-production being filmed by Colonelle Films and Woods Entertainment and is expected to be released in Spring 2020, first in theatres then on CRAVE TV and probably on VOD.

The northeast has been experiencing a surge in film production, and West Nipissing has also been repeatedly scouted as a location for scenes from several productions, such as the television series Cardinal and at least two Hallmark movies.

The producers of Like A House In Fire say they chose West Nipissing/ Sturgeon Falls “because we were looking for a small town vibe and we just fell in love with the sunset and the light that never dies.”

The director and writer is Jesse Noah Klein, originally from Montreal and more recently from Austin, Texas. A brief plot synopsis explains, “Dara returns home to reconnect with the young daughter and estranged husband she left 2 years before. She soon finds that her daughter does not remember her and her husband is with a woman now 7-months pregnant. Like A House On Fire is the story of a woman’s fight to reclaim the life she left behind.”  The movie features actors Sarah Sutherland (daughter of Kiefer Sutherland and granddaughter of Donald Sutherland), Jared Abrahamson, Dominique Provost-Chalkley and Amanda Brugel. The crew expects to be finished with all filming by July 15.
​
... to read more, click here. 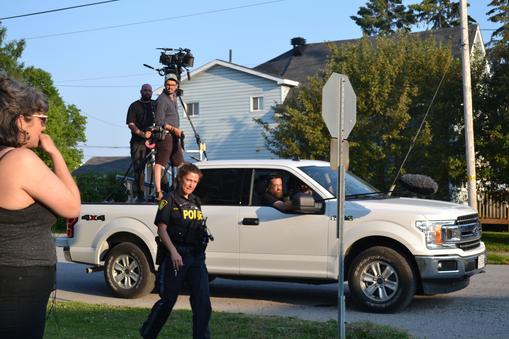