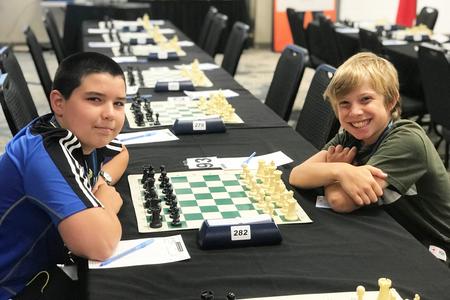 TThey travelled across the country to face the nation’s best; 12-year old Rémy Levesque and 11-year old Guillaume Levac did West Nipissing proud at the 2019 Canadian Youth Chess Championship in Regina, Saskatchewean July 6 to 10. The two qualified for the event after excelling at the provincial youth championship for students aged 8 to 18, and both say they learned a lot from the experience.

“It went really well… I had a lot of fun,” shares Guillaume. “It was my first time visiting the city and it was great. It was pretty impressive… and I was a little nervous going in but overall I had a fantastic experience.”

The youngster won one of his six matches at the tournament, and father Serge Levac is pleased. “It was intensely competitive. There were a lot of competitive players from across the country. He told me on the way out there that his objective was to win a match, so he attained his goal. [His mom and I] are proud of him, from receiving the invitation to participate, to going out there and doing his best. We knew how competitive it was going to be, but knew it was going to be a great experience for him.”

Rémy and his family also had a blast. “I would have liked to win a game, but it was still a great experience!” It was Rémy’s second national tournament in his young career, as he travelled to Windsor a couple of years ago to compete. “The event took place at the hotel way stayed at… so I’d wake up and just go downstairs and play chess!”