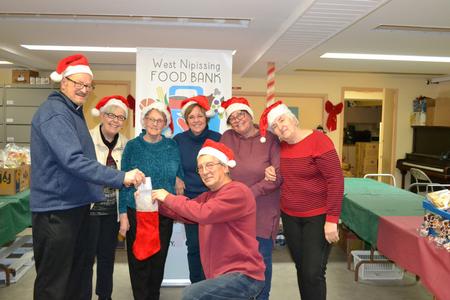 It was a spectacular success in every way when the community choir La Clé des chants raised everyone’s spirits while lifting their voices at a hastily-called concert, filling Église Sacré-Coeur with people and music on Sunday, Dec. 15. The price of entry was either a cash donation or food for the West Nipissing Food Bank, netting over $700 and a lot of food, beyond everyone’s expectations.

“It was unbelievable,” beams Conductor Cynthia Roveda. “This event was organized because we were supposed to sing at Au Château, but it was closed due to illness.” Roveda relates that the choir was already organized but without a venue, so they approached Father Jean Legault and asked if the church was available. Raymonde Gaudette and Cynthia Roveda organized the concert very quickly. The event turned out to be “one of the best ever,” according to Conductor Fernande Beaudry.

It was also the first such concerts at the newly built church, which was packed for the occasion. The crowd was entranced by 90 minutes of music that even sparked spontaneous singing in the audience. There were also a few surprises, with Roveda’s music students performing a few numbers as well. When Emma Rivet presented a gorgeous French rendition of Hallelujah, the entire church joined in the chorus. “It was beautiful, it felt like an angel was singing, it gave us shivers. Everybody joined in. That song does something to you; it comes in and reaches into you,” describes Raymonde Gaudette.