Thousands of smiles were spread around the community during the week of Sept. 17 to 23, and the result was a huge reason to smile for one deserving local charity.

The occasion was Tim Hortons’ annual Smile Cookies campaign, with proceeds from the $1 special cookie going to Community Living West Nipissing. For the 10th year in a row, West Nipissing jumped at the opportunity to help, buying over 19,000 cookies in just a short week!

The total surpassed the whopping 17,000 sold last year, and earned West Nipissing bragging rights for the highest percentage of sales in the region, as well as most cookies sold. The region takes up most of Northern Ontario and stretches from Iroquois Falls to Bracebridge, meaning the two local Tim Hortons’ bested many larger counterparts.

The sales resulted in over $19,000 raised for Community Living and its clients, and lots of happy people as several businesses and organizations bought dozens and dozens of cookies to donate. Smiling recipients included the diners at the WN Community Kitchen, staff and residents at the Au Château, sports teams, teachers, coaches and more. “The event really spreads cheer all across the community,” beams Community Living Executive Director Sylvie Belanger. 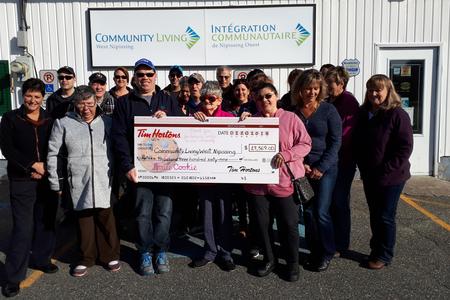