IPM executive committee members welcomed nearly 500 guests to an Open House event at the Verner arena last week, telling them how they can be a part of the largest event ever to be held in the area. They were joined by Nickel Belt MP Marc Serré, who made two major funding announcements on behalf of FedNor. 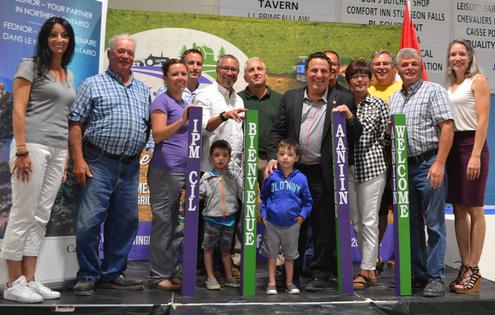 As part of the IPM Open House event on August 15 in Verner, Dan Olivier took guests on a tour of his fields, being transformed into a vast city with roads, electricity, tents, fences and all the infrastructure needed to accomodate the tens of thousands of visitors expected to descend on the area next month. 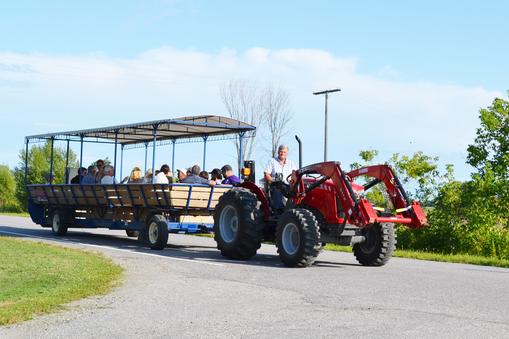 It was a happy crowd in Verner last week when 400 to 500 people showed up at the final IPM 2019 Open House before the major event takes place in just a few weeks’ time.

While the final push allowed people to see what is rapidly taking shape and to get on board as volunteers, it was also the perfect opportunity for Nickel Belt MP Marc Serré to make two major federal funding announcements through FedNor.

The first block of funding, $225,000, was provided as part of FedNor’s tourism investments to support the IPM’s infrastructure upgrades for the 1000 acres of farmland required to host the event. These funds will be directed towards culverts, drainage, roads and fencing. The money comes from the Canadian Experiences Fund, and follows previous investments through FedNor that saw $63,000 for the hiring of a Marketing Coordinator for two years, $191,250 invested in 2018 for project coordination, and $41,000 to hire seven summer students in 2019.

Serré was met with an enthusiastic audience as he relayed the good news in a very loud Verner arena, joking about the days when he himself played hockey there and was often body checked by Tom Lambert, an IPM 2019 Executive Committee member and Nipissing First Nation Economic Development officer who was in the audience. The MP also praised the pioneers of Verner, many of whose descendants were integral to the organizing of the IPM 2019 and “the many, many, countless hours put in by a community that has taken on the risk of organizing this massive event which is going to be the largest in northern Ontario. What else is bigger than that?... The Committee, the board members, their parents and grandparents are part of the rich history of farming and agriculture of West Nipissing and Verner… The economic impact this will have for the area for decades to come - people will be coming to West Nipissing for the first time, and it will follow up for years… We just have to find ways to leverage the Plowing Match to find new investments for the area… It will attract more investment and business, which will in turn increase the land value...  There’s also the retirement aspect with how West Nipissing is strategically placed between Sudbury and North Bay. In some years there are more houses being built in West Nipissing than in North Bay and Sudbury.”