Robert Whissel and Samantha Disley, along with 9-year old twins Alyssa and Chloë and 5-year old Ashlynn, were enjoying a day with family at a camp by Clear Lake when the call came in that their home was on fire. The couple left the children with their step-family and rushed to the scene, only to find everything gone. “I didn’t actually see the house burn down, just videos. When we got there, they had pretty well put it out, just dealing with hot spots. It was gone when we got there… At that point we thought we had lost 4 animals,” recounts Disley, adding that her children were devastated.

Disley herself is still in shock over the scope of the loss. She had lost both her parents and was an only child and all the family memorabilia has been incinerated, including photos and mementos of her children’s activities and special occasions over the years.  “Those things you can’t get back.”

A young family in Cache Bay lost their home and two precious pets in a horrific house fire on Friday, July 3, but managed to rescue two other pets.

The five-member Disley-Whissel family, Samantha and Robert and their three young daughters, were not home when the fire broke out at their Pine Street home; a neighbour alerted fire fighters.

Fire Chief Richard Maranda reports that WN Fire Service received a call at 12:12 in the afternoon, and fire crews arrived to a house in full blaze. “By 3:30 we had left the scene, except for one vehicle. We kept a truck there for a fire watch. We had three tucks initially respond to the fire, the pumper, the rescue and the ladder. The fire was fully involved when we got there. I believe it was a 4-bedroom home, and it was a total loss.”

The fire not only destroyed the home and contents but also took the lives of two dogs inside. Two cats were found alive on Saturday morning and rescued from the rubble, subsequently receiving veterinary care.

Chief Maranda says the blaze is still under investigation in order to identify the source, though it is not deemed a suspicious fire. “We’re still waiting for the reports. It’s a family of five and, yes, they are out of a home now.”

Maranda adds that the fire was particularly difficult for his department because of the sweltering heat that day. “It was really hot, both the fire and the day. The problem is heat exhaustion. We had to rotate the guys doing the work as much as we could, to give a break. Within 3 hours the fire was in control; we were just working on the hot spots.”

As for the family, the Chief says “They were insured, thank God. Their insurance has taken over now… That’s their job.” Nevertheless, his job also continues. “We’re looking at pictures; we were there yesterday with a Fire Cause Expert and we’re just waiting for the report now. It’s a complete loss and it was a big enough house – we would estimate $400K with the house and contents. I would say over $400K. It was an older home with a newer extension on it. These owners purchased the house with the extension. They’ve been there for at least 10 years.”

The home of the Disley-Whissell family, located on Pine St. in Sturgeon Falls was completely destroyed by fire on Friday, July 3. 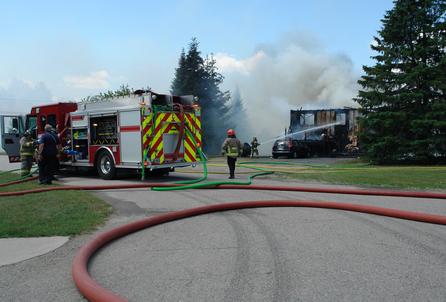