It was a field day for the West Nipissing Food Bank. In hopes of starting a new annual event, Mitch DesChatelets of Leisure Farms opened his vegetable patch to food bank pickers on September 12. He invited volunteers from area food banks of West Nipissing, North Bay and Mattawa to load up on veggies, to fill their shelves so food bank recipients could also enjoy the benefits of local produce. It was a beautiful sunny day for the volunteers, many of whom had no experience in digging for potatoes. Mitch showed them how to root for the tubers with their bare hands, pointing out that the process of picking straight from the field helps people “make a connection” between the food, the land and the growers.

DesChatelets noted that he usually supplies food to the food banks at the end of the season through the North Bay Farmers Market, but this year he felt it was time to step it up. “Hopefully we’ll be filling up the food banks,” he said. “We have enough that they can pick quite a bit. I did a bit with Mattawa before, but wanted to make an event out of it, an annual event. It’s not just that they get the vegetables out of it, but a fun day with the connection [to the farm].”

Ken Perrin, president of the WN Food Bank, at the beginning of the day said, “I don’t know what we’re picking.” By the end of the day and hundreds of pounds of food later, he commented with a laugh, “I won’t be applying for a job at Leisure Farms anytime soon!” The day was extremely fulfilling he said, with a luncheon of fresh corn supplied by Mitch for all the pickers. However, it was also hard work harvesting the crops.

“It’s so timely, with the IPM, this is a great example,” Mitch explained of his educational approach. “It should be fun! They will have a better idea; maybe some have never picked fruits or vegetables before. You guys will get dirty, but that’s part of the experience. We’ll start with potatoes and carrots, because those are the popular items.” 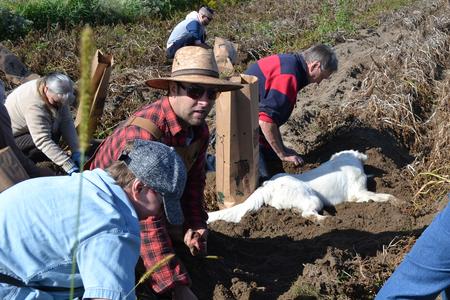 Mitch Deschatelets of Leisure Farms and his dog, Pumpkin, showed foodbank volunteers how to dig up taters on Sept. 12