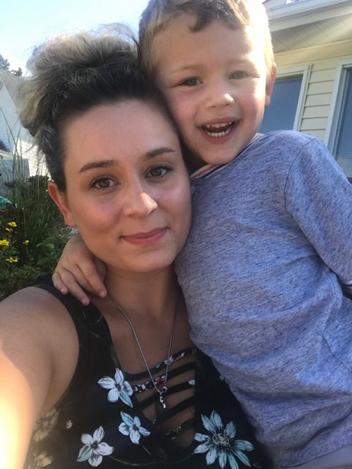 A young mother is still shaken after her 4-year old son grabbed a baggie of suspected Purple H, heroin laced with the deadly opioid fentanyl, in a public washroom at the WN General Hospital.

West Nipissing resident Terry-Lynn Quenneville’s child broke out in hives Monday night, August 5, and she brought him to the hospital’s emergency department to get him checked out. “I let [WNGH staff] know that he had an allergic reaction and wanted him to get looked at - after that we waited in the waiting room,” recounts Quenneville. “He kept bugging me that he wanted to go to the bathroom, and because it was so packed I figured I’d go at the same time. When we were in there, he finished and I sat down. I told him to wash his hands. He picked up something and said ‘What’s this mommy?’ and as soon as he held it up I realized what it was and smacked it out of his hands!”

She suspected there was a drug in the tiny bag, describing it as the size of a Lego block with a bluish substance inside. The washroom they were in was in the hospital emergency waiting room, and thus open to anyone walking in.

The package hit the sink and Quenneville grabbed her son right away, thoroughly washing both their hands before running to the emergency to let staff know what had just happened.

“I banged on the window and I said ‘My son just touched a baggy full of drugs!’ they responded very quickly both bringing him in and examining him as well as contacting the police. I showed the nurse where the drugs were and they locked down the bathroom. It was a tiny little bag… not a bag of drugs you see in movies. Smaller. Like only an inch or so wide and high, and it had little blue devils on it. The substance inside was bluish,” she describes.