On June 26, ground was broken for the development of new social housing to help prevent homelessness in West Nipissing, thanks to a $2.16 million investment by the federal government and $900K by the province, with the municipality providing the land. The housing units, destined for Aboriginal residents, will be built on town land at the corner of Coursol and Railway, and will be constructed from repurposed shipping containers. They will also feature solar energy, and have a net zero energy consumption, making them affordable to occupants.

The proponent for the shipping container process has been granted a $118,750 interest free loan and a $371,250 contribution from the Innovation Fund ($490K in total). MPP Vic Fedeli (Nipissing) noted that the provincial Indigenous Supportive Housing Program contributed $900K to the project through both capital and operating dollars to the Ontario Aboriginal Housing Services. “It provides both a home, and the supports people need to remain in that home, in a way that respects Indigenous culture and beliefs,” he noted.

Nickel Belt federal MP Marc Serré was on hand for the groundbreaking, on behalf of Jean-Yves Duclos, federal Minister of Families, Children and Social Development and the minister responsible for the Canada Mortgage and Housing Corp, which provided the funding. 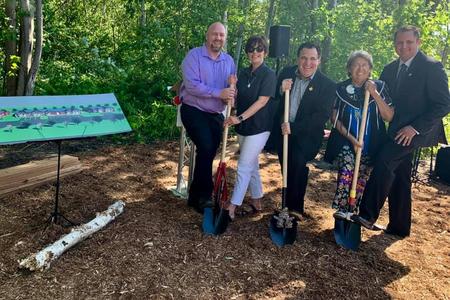 A ceremonial breaking of the ground was held on June 26 for the new West Nipissing Housing Development, a joint venture between Ontario Aboriginal Housing Services and the Municipality of West Nipissing, with provincial and federal funding. The 14 new housing units will be built on part of the former “Fiddle Park”, at the corner of Coursol and Railway in Sturgeon Falls. L-R: Coun. Jeremy Séguin, Mayor Joanne Savage for West Nipissing, MP Marc Serré for the federal government, Elder Evelyn McLeod of Nipissing First Nation, and Justin Marchand, Executive Director of Ontario Aboriginal Housing Services.