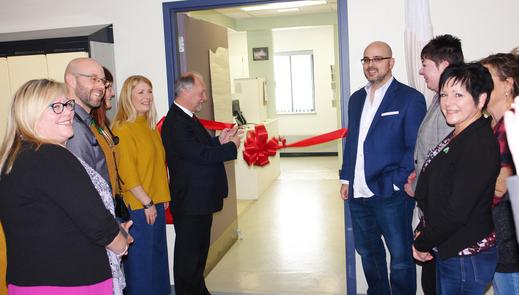 It was a day of celebration at WN General Hospital on Friday, March 6, as staff and community dignitaries got together for a special announcement that the hospital was finally approved for the purchase of a CT scanner.

The hospital has had the scanner in its sites since its 2013 Strategic Plan, and the proposal to the North East Local Health Integration Network (NELHIN) and the Ministry of Health began in 2015. The thumbs up was received at last in the first week of March.

The CT scanner and room renovations are expected to cost about $1.8 million dollars, due to specific requirements for the room that include lead-lined walls, doors, windows, flooring and more. The project will be funded by the WNGH, as the provincial approval did not come with any funding. Hospital CEO Cynthia Desormiers nonetheless assures the money is in place, from nearly a decade of annual surpluses that have been invested to ensure the funds would be there when the approval came.

It is estimated that the build and room renovations will take roughly 6 months to complete, with the WNGH being very hopeful with an operational date of September 2020. Until then, local patients have to access CT scans out of town, generally in North Bay, where there is often a long wait time.
e call with four vehicles - two pumpers and two tankers.