​After weeks of anticipation, the elusive joker has finally been found and the Nipissing Warriors Jig the Joker jackpot has been won. Lorey Toulouse of Sagamok First Nation is $696,787.50 richer as her ticket was the lucky one chosen during the October 9 draw, and her pick of envelope #45 contained that much-sought-after joker.

Jig the Joker was a weekly draw with 30% of ticket sales going to a weekly pot, 30% accumulating into a progressive pot until the joker was found, and 40% going to the Nipissing First Nation Warriors hockey program. Every Wednesday, a new winner was drawn for the weekly prize, but the progressive would be won only if the ticket holder picked the numbered envelope, from 1 to 53, containing the joker. The longer the joker remained hidden, the more the pot grew, until there were just six envelopes left and a progressive jackpot surpassing $650,000 after 48 weeks. Toulouse won the weekly prize of $45,496.50, plus the progressive of $651,291.

Obviously, more and more tickets were sold as the word spread of the giant jackpot, and people would watch excitedly as the draw was broadcast live on Facebook every Wednesday evening. In addition to the $696K won on Oct. 9, 47 weekly prizes totaling $651,291 were handed out, with the weekly amount also growing as more tickets were sold. The excitement continued week after week, and it required countless volunteer hours for the organizers and ticket sellers, who would have to write out hundreds of tickets by hand for each draw. Melvin McLeod and other organizers figured it would last two to 40 weeks, but they never thought it would grow like it did.

“After observing other fundraisers in other communities, we had an idea how long it would take. But we weren’t expecting it to escalate like it did and to the point that it did. I mean… it’s a good problem to have! But we didn’t think we would make it this far,” admits McLeod.
​ 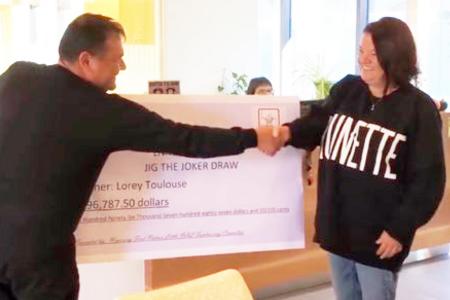