Jason Coleman stands with parents Roger and Heidi Laurin and coach Wayne St-Martin in the background. Coleman will be snowshoeing in the Special Olympics World Winter Games in Kazan, Russia next year after being named to Team Canada. 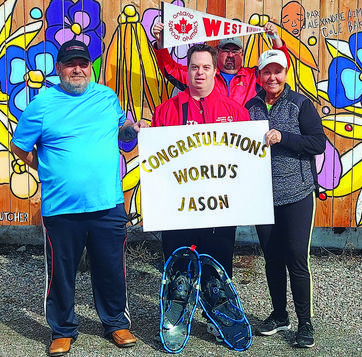 At the end of every snowshoeing season, Jason Coleman likes to give his head coach, Wayne St-Martin a scare.

“It’s been four years he’s been saying he’ll retire,” says St-Martin. “And then, when winter comes, it’s ‘Oh yeah, when does practice start?’”

This time around, no one believes for a second Coleman will step away from the sport; not when he’s going to have the opportunity to represent Canada in the next Special Olympics World Winter Games in Russia in 2022!

Coleman was announced as one of 108 athletes to make the Special Olympics Team Canada 2022 roster earlier this month. He is just the third athlete from West Nipissing to go to World Games and the first one to represent the area in nearly 30 years.

“He hasn’t stopped talking about it,” beams his mother, Heidi Laurin. “He keeps going ‘Mom, I’m going to go and work hard!’”

Coleman has been participating in Special Olympics since he was eight years old. He’s competed on the regional, provincial and national stages for sports like swimming, baseball and track and field, but it was only natural that he would ascend to the international stage in a winter sport.

“I was born in it,” says Coleman, who celebrates a December birthday.

He qualified for Team Canada by claiming gold in the 100 and 200 metre snowshoe races at nationals in Thunder Bay in February 2020.

The Winter Games were initially slated to be held in Åre and Östersund, Sweden in 2021. However, a new host nation had to be found after the Swedish Paralympic Committee voted not to fund the event in December 2019. Russia stepped in as a host in June of 2020, in what will be the nation’s first time hosting the Special Olympics Winter Games.

St-Martin and Coleman’s parents, Heidi and Roger Laurin, found out at the end of last year that he had made Team Canada. But they weren’t allowed to share the news until the roster was officially announced earlier this month.

“We knew in December, but tried to not tell him,” says Heidi. “Finally come New Years, I just had to tell him. But he was so good, he never told anybody.”

Technically, Coleman is on the Team Canada 2022 Training Squad; but all members will officially become Special Olympics Team Canada 2022 once they progress through all the necessary training and “the safety of international travel and mass gatherings specific to the 2022 Games is assessed.”