When Jeremy Seguin of Verner received a call from his MP, Marc Serré, asking if he would be part of a round table with Prime Minsiter Justin Trudeau, he first thought it was a joke. But on October 2nd the local teacher and West Nipissing municipal councillor attended a meeting he calls “surreal”, totally unexpected, and right up there as one of his pivotal life moments.

“It started off with [MP Marc Serré] calling me up in regards to my losing my job as a teacher in Mattawa last year,” recounts Seguin. “It was a Ford cut, so he said, ‘I have a proposition for you; in less than 48 hours, show up in Ottawa.’ Okay, what do you want to do while I’m there? ‘Oh, just speak to Justin’. Speak to him about what? ‘Basically about your experiences in the educational system since the Ford cuts – how did the Ford cuts affect you personally.’ At first, I thought it was a joke, until I got a phone call from one of our Prime Minister’s staffers, and then I started to believe it was real.”

Two days later, Seguin was sitting beside Justin Trudeau, talking about how hard the educational cuts were affecting school boards, educators and students. “We were five teachers, (…) none of us could believe we were sitting in a small room at a table with the PM… We had discussed in that hour before he showed up how things were affecting us, and we found that all our stories were similar.” The recorded discussion is available online.

All five teachers were relatively young, and Seguin explains this is no coincidence. “Well we were the ones affected by cuts, because it’s seniority, it’s not a meritocracy. The teacher from Elliot Lake had the exact same issues we had here in Mattawa and Sturgeon, except they have a real hard time getting teachers – they still have open positions. Some got cut and some just quit. Some responded like I did …teachers just said, ‘I’m not going to deal with this for the next three years’ and they just went for other positions.”

Seguin spoke of a classroom in the North Bay area with 39 students, deploring “all the Teaching Assistants that got cut! And in our board we lost 10% of our high school teachers.” Asked if the teachers sitting with Trudeau were selected on a partisan basis, Seguin responds, “Not at all! I’m a swing voter. I don’t think I’ve ever voted for the same party twice in a row… It depends on platforms… and I’m still like that today. Meeting Trudeau doesn’t mean I turned into a fanboy, but it was more butterflies because I just met the most important person in Canada, politically speaking.” 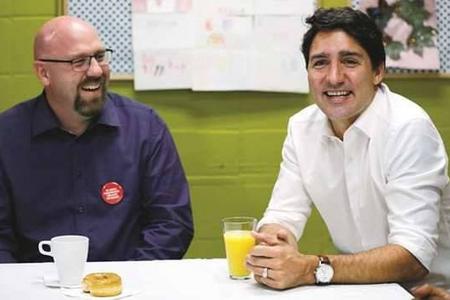