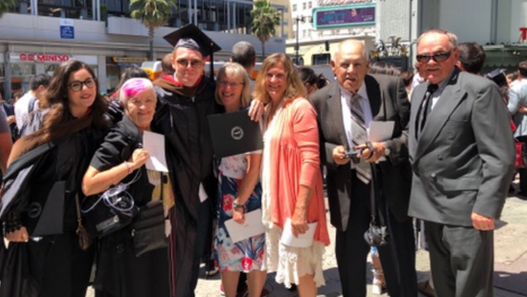 Making movies with the help of West Nipissing… and Alex Trebek

In 2017, local friends, family and supporters of cinema photographer Mathieu Séguin pulled together to help him realize his dream – to attend the American Film Institute (AFI) as one of 28 international students, and the only Canadian, to qualify for entry. Top-rated, and very expensive, the two-year program was a once-in-a-lifetime opportunity to study cinema in Hollywood, Los Angeles, in a school internationally renowned for turning out first rate professionals in all areas of movie production. It would eventually cost about $250,000. But AFI alumni are consistently famous for their expertise, and Mathieu Séguin saw the door, and walked through it.

He’s now come out the other side as a graduate, embarking on his career with unsurpassed confidence that he has the tools for any level of production. His parents, Omer and Gisèle Séguin of Sturgeon Falls and Field, are exceptionally proud of their youngest son for making it this far, and on June 10, 2019 they went to Los Angeles with other family members, Richard and Colette Filion and Gaetanne Courchesne (aunts and uncle) to witness the cap and gown ceremony crowning his achievement. That event took place at the world-famous Grauman’s Chinese Theatre, which is fronted by the Walk of Fame on Hollywood Blvd. You can’t get more L.A. than that!

Omer and Gisèle expressed pride in all four of their sons, noting that they all used to film at their country home in Field when they were aged 10 and 11 and that, as the youngest, Mathieu benefited from these experiences shared with his siblings. Aware of the future potential for his son to become famous in his field, Omer added, “I hope he doesn’t forget his roots!” Gisèle, his biggest fan, is sure he will always remain grateful. “Mathieu is a bit special now, but he needed a lot of help. It’s his dream come true!”