Another outdoor mural was unveiled in downtown Sturgeon Falls this Monday morning, July 6, this one by Verner artist Hélène Chayer.

Chayer has been involved with several indoor murals in the town and has supported the arts community of West Nipissing for many years. Her triptych, featuring a natural landscape of trees, blue sky and water on three panels, was mounted on the south side of the King Street building belonging to Marian and Jacqueline Bergeron, housing La Vie en Couleur and MJD Place.

The mural represents another jewel in the crown of Gayle Primeau, as the 8th mural she has helped to coordinate as part of her ongoing efforts to beautify downtown Sturgeon Falls. A gathering of roughly 15 people arrived at the official presentation on Monday, including MP Marc Serré, who lauded the arts community for its importance to the life and culture of West Nipissing.

For Hélène Chayer, it was a heart-warming reception for a lovely piece of art, which she hasn’t named, but which she refers to as her “Covid art” as it was undertaken during quarantine. In soft blended tones, she captured a representation of a northern Ontario landscape of birch trees and water. She explains that this project followed that of the sturgeon fish she painted for the Sturgeon Falls Beautification committee during the International Plowing Match in 2019. After the plowing match was over, “Gayle [Primeau] called me and asked if I could add details to it as they were thinking of putting it up at Minnehaha Bay. It looks a little funky; I added logs underneath it, re-worked it. That went up. I told Gayle I would be interested in doing a mural somewhere.”

At that time, Primeau was encouraging Marian and Jacqueline Bergeron to consider their building for a mural. Chayer explains that Marian Bergeron’s main concern was having unsightly peeling paint on his wall. “I asked if he’d considered three pieces of wood (a triptych). If you get tired of it, just take it down! We consulted together. They showed me a painting in their house they really liked, so the inspiration was that painting – and there you go! It’s done.”

The painting that inspired her is in fact a common scene - it could be anywhere in the area. “Everyone who sees that panting in their house says the place seems familiar to them – it reminds some of Mattawa, or a lake they’ve been to.” The same can be said of her mural. “It has birch trees, the trunks are funky and the leaves are funky but it gives the impression you’ve been there before.” 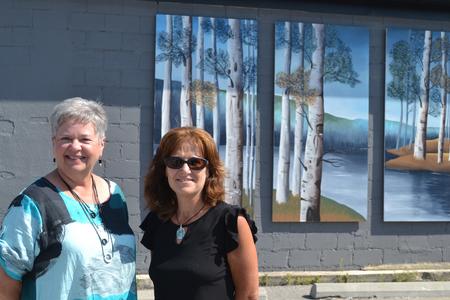