Gayle Primeau of the WN Beautification Committee (right) is particularly proud of this interactive mural by artist Julie Lafrenière mounted on John Street at Main. This mural is one of three murals mounted recently in the downtown core. 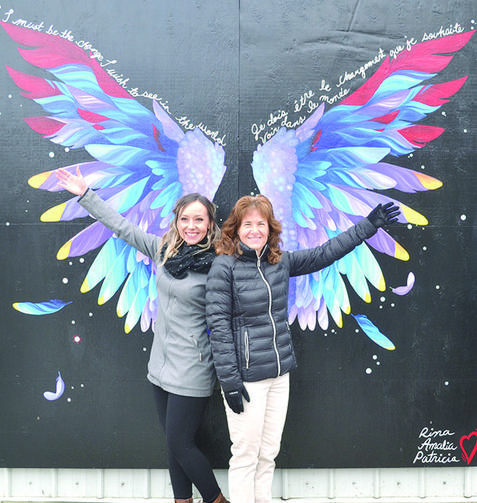 The latest mural in Sturgeon Falls is interactive, inviting viewers to get right in there and be part of the scene. Wings of Hope / Les ailes de l’espoir, is an 8’ x 8’ painting of outstretched wings between which viewers can stand to have their photo taken. This piece, painted by Julie Lafrenière, is a particularly significant one for organizer Gayle Primeau. As it was mounted on Saturday, October 24, at the corner of Main and John, Gayle noted that this one was dedicated to her mother and grandmother, as well as her husband Stuart Seville’s mother.

Primeau, who has been a motivating force behind the murals going up across town, said, “I've always wanted an angel mural. I'm excited. When I gave birth to my youngest, I had a complication during childbirth… an amniotic fluid embolism and luckily survived it. I believe my grandmother had something to do with this. She is my guardian angel and now my mom is there too… pretty cool.” She also asked Julie Lafrenière to add a quote in French and English. “I chose a quote to make people reflect when they take a picture – “I must be the change I wish to see in the world” – Ghandi.