The Ontario Secondary School Teachers’ Federation (OSSTF) has been doing rolling walk-outs in the last two weeks to demand a raise and to protest proposed changes to high school education, including bumping up the average class size and implementing mandatory online courses.

Negotiations between the union and the province have stalled, with both sides digging in; teachers want a 2% pay hike while the Ministry of Education is insisting on 1%, citing a provincial budget deficit. Teachers also want more help in the classroom to assist with special needs, and say students will not be well-served by larger classes and online learning with little to no support.

Locally, only the Near North District School Board high school teachers and support staff are involved in the strike action, which saw them protesting outside of Northern Secondary School on December 4. The French public school housed in the same building, École secondaire publique Nipissing Ouest, was not affected, and neither was Franco-Cité, which falls under the French Catholic school board, Franco-Nord. However, other unions have also voted for strike action, and could follow suit eventually. 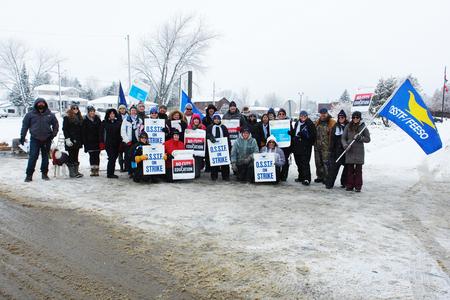