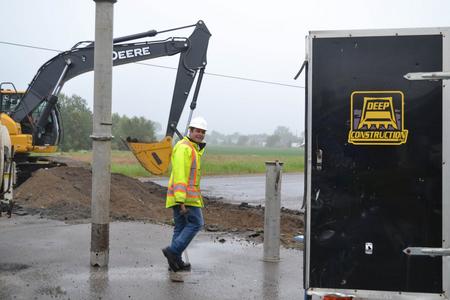 At last, ground has been broken at the site of the future OPP Nipissing Ouest Detachment building, and construction is set to start this summer on the Levac Road property in Cache Bay.

West Nipissing Council awarded the building contract at its June 16th meeting, and preliminary site preparation work, connecting to municipal sewer, water and drainage systems, began on the morning of June 24. During the meeting, architectural renditions of the exterior of the building were presented, however the interior design of the building remains classified.

Director of Community Services, Stephan Poulin provided a memo outlining the process. He said the building design had to be completed and then approved by OPP before the contract could got out to tender. Once that was complete, bids were invited until June 11. According to Poulin, site preparation work is scheduled to be complete by June 30, and construction is anticipated to begin in August.

The company awarded the building contract is Capital Construction, out of Sudbury. The preliminary work of extending municipal services to the site is being undertaken by Deep Construction of West Nipissing, on a separate contract.  West Nipissing CAO Jay Barbeau, responding to questions put by council, explained that the bidding competition was done by the OPP. “[The Contractors] have to have stringent experience working with the OPP in the past,” he said, and all the bidders were vetted prior to competition. Following the pre-qualification, a total of seven contractors were eligible and submitted bids by the June 11 deadline. Capital Construction had the lowest bid at $9,094,879.
Councillor Yvon Duhaime said he was pleased that the construction company was local, from northern Ontario. “If they had come from the Toronto area, I would be concerned (the Covid situation there).” He added that with a company from Sudbury, it would be easier for local sub contractors to help them do their work in a safe manner. Mayor Joanne Savage concurred, saying “I’m happy they selected a company from Sudbury… it’s good for the economy of the area.”