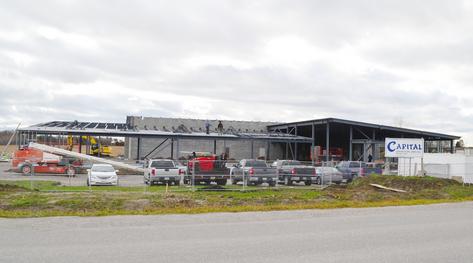 Inspector Mike Maville, the Detachment Commander for OPP West Nipissing, reports that the building of the new detachment in Cache Bay is on schedule. The building is rapidly taking shape and is expected to be complete by August of 2021.

The West Nipissing OPP Service Board (WNOPPSB) met on October 21 to receive a statistics report from Inspector Michael Maville. The board is down to three members – Chair Chris Fisher, Roch St-Louis and Denis Sénécal, all municipal appointees, as the province has yet to name two appointees to replace former members Barry Bertrand and Céleste Auger-Proulx.

Chair Fisher noted that Sénécal has not been attending meetings, thus exacerbating the lack of board members and affecting the operation of the board. Both Fisher and Sénécal are members of WN municipal council, and sit on the Police Board on behalf of council. “He (Sénécal) sent a letter saying he didn’t want to come unless it was virtual meetings, which is odd since he voted down all virtual meetings last night at council.” Fisher added that he intended to write a letter to the Inspector General concerning the lack of movement in selecting new members for the board. “We’re going to write this guy a letter that we’ve been more than a year without appointees, so we need warm bodies here… Please give us some appointees because there is no movement – currently the way it’s structured, we have no way of getting someone on board.”

For his part, Insp. Michael Maville, Detachment Commander of the OPP Nipissing West, delivered the first report that included a year-over-year 3-month comparison from July to September. Previously all reports were still comparing the OPP statistics with the former WNPSB statistics, which could not provide a clear picture; from this point forward, after 15 months of OPP services, the year-over-year stats reflect only OPP activity, providing for a more accurate overview.