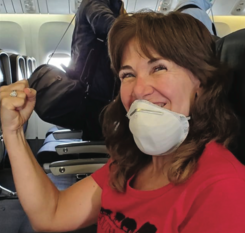 Gayle Primeau gives a happy and relieved smile as she and husband Stuart Seville finally begin the last leg of their long journey back home to Canada, after being nearly stuck in South Africa when the COVID-19 crisis hit.

Out of Africa, and relieved to be home

It’s not likely going to be a movie, but the Stuart Seville and Gayle Primeau version of Out of Africa is riveting enough. The couple is well known in Sturgeon Falls for the work Gayle does in downtown beautification and Stuart as a real estate entrepreneur. The two avid travelers took a trip to South Africa in early March, just before COVID-19 began to take hold in Canada, and had a very difficult time trying to get back home in the midst of international shutdowns that quickly followed. By publication date, they will have almost completed their 14 days of strict isolation at home in Sturgeon Falls – where they are very relieved to be now.

The Tribune spoke to them by telephone on day 4 of their isolation and they seemed very upbeat about staying home. “It was quite an adventure,” says Gayle. “Whenever we go somewhere, I always say “Another adventure begins’. Well, I didn’t think it was going to be this type!”

Gayle relates that when they left Canada on March 9, the problems were still mostly related to China and their 16-day tour was still on. “We flew to Cape Town (South Africa) and everything was normal. You heard about it, but it was very difficult to get any Canadian news coverage at all there. All we could hear was CNN, and Trump, and that’s it…  After we left the Cape Town area to the smaller areas, we started to lose communication because we didn’t have internet during the day. We ended up in these remote areas with rolling blackouts, because we were on safari. That’s when things started to go hairy because when we did get messages, they were mostly from my sister, and friends from here.”  Those messages were urging them to return home.

Stuart Seville relates, “About the 12-13th of March, that’s when things started ramping up around the world and at that point South Africa didn’t have any cases. I’d like to point out that when we arrived at Cape Town, they were way ahead of Pearson [International airport in Toronto], they had people with masks there and they hadn’t even had a case, and they were taking the temperature of everyone who entered the country…  By the time we got to Durban, 4 days later, Durban just got their first 2 or 3 cases, people who had come from Italy. So things started to move in that four days and we were on a bus trip to Eswatini.”

At this point, Gayle was getting more urgent messages, when they did have Internet access, about borders being closed. “I had three nights of no sleeping, crying and anxiety and panic attacks and I wanted out. ‘I don’t care, get me out.’ I sent information to our tour director because all this time she was saying she didn’t have any news, everything was fine. Finally, the night we were supposed to go to Kruger [National Park], the second portion of our tour was cancelled.”

Stuart continues, “This was when we were in Eswatini. It’s a landlocked country within South Africa, a kingdom, so you physically had to go over a border to get in and out.” The tour director was worried that they wouldn’t be allowed back into South Africa. “Three days following, we were supposed to go to Zimbabwe and then to Botswana, but no-one knew what was happening with the border; it looked like everything was shutting down. The next day we went to Kruger, which was my birthday, March 17.”

Gayle says they did enjoy themselves visiting the park, “But then we heard there were cases of Covid-19 in Zimbabwe. The problem with going on was there was only one international airport… If we had gone into those countries, there was no way we would have got out because they closed that portion. The only airports were Johannesburg or Cape Town.” There were absolutely no direct flights out of either Botswana or Zimbabwe. “The Covid-19 cases were in Harare (Zimbabwe)… so after Kruger we went back to Johannesburg. We were in a bus and there was nothing we could do. And then my children were sending me texts – ‘Mom, you have to come home!’ I was having a hard time keeping it together.”

The couple tried to get their flight rebooked, but the flight locator wouldn’t allow them, and their travel agent was also stuck and of no help. The tour operator told them they were on their own. Gayle found her flight attendant friend, who was in California. “Get your tickets and get out!” she was told. She met a former acquaintance who had some connections in the South African government, “She told me by the weekend the airports would be shut and we needed to get out otherwise we would be stuck there. Sure enough, the day we went to the airport, all the flights were being cancelled and they weren’t allowing some planes to come in. It was starting.” Gayle got a hold of a travel agent in Ottawa who was helping Canadians. “At 1 in the morning we secured a ticket on British Airways and then Air Canada. It cost us an arm and a leg, but at that point we didn’t give a… We wanted to get home.”

Stuart relates that the airport was a mess. “When we were at the airport, that day virtually everything was getting cancelled…  People who were coming into the country from outside, [South Africa] blocked all international travel while they were in mid flight. They had planes surrounded on the runway by police and they wouldn’t allow the people out. They literally refuelled them and made them fly back.”

While the couple was trying desperately to book a flight back to Canada, the airports were being shut in Europe, so they also had to examine the option of taking a flight to Brazil and then to Toronto. Stuart was also looking at flights going through Abu Dhabi, Dubai, from there to London and then Toronto. In the space of a few hours, the cost of flying doubled. They were extremely fortunate to get the tickets they did. “We ended up going British Airways; they had flown in an extra couple of jets, there were a couple on the runway. We flew in a [Boeing] 381, a double decker, and it was absolutely full, packed. The same thing happened when we got to Heathrow. It was a rescue plane but still cost us $2100.” The rescue flight was barebones, water and peanuts. The speed with which things were changing was stunning to the couple. Stuart notes, “At the airport, the lineup was unbelievable! They started bumping people. We were there 3 hours before, and it was full and we thought we might get bumped even though we had a ticket. I never felt okay until we were actually sitting in the seats.”

When they finally got on the plane and got their seats, Stuart snapped a pic of Gayle wearing her mask. She says “Ever since we’ve started traveling… I’ve always signed up for Travellers Abroad  - I know the to-do’s that most people don’t know. The last trip in Ecuador we were very well informed and knew what to do when it looked like there would be civil unrest. This time we got nothing – we received nothing from the government. …When we tried to call, the lines were busy; the day we were leaving our flight was still showing that it was coming in when actually all flights were cancelled. The communication was really difficult.”

Gayle says everything is a bit of a blur, with the situation evolving so fast. “I have a feeling that when you publish this, there will be people who will say ‘It’s their fault, they shouldn’t have gone’, but we did everything that was right. We didn’t know this was going to happen or go this fast. I firmly believe that a lot of people were caught in that situation at no fault of their own, trying to get out and stuck.” They left on March 9, and schools were not shut down until March 14.  It wasn’t quite the same as people who still took March break trips even after being warned, she notes. “We were going into an area that didn’t have a case. We felt we were safe … We have always put safety a number one, and we assumed we weren’t in danger. There was nothing telling us things were going to close down.”

Stuart notes, “This virus has spread by travelling; it’s virtually spread around the world. Coming into Pearson, there was no screening whatsoever. There were guys handing out forms, but no screening – they asked a question – it’s all on the honour system. Who’s going to say they are coughing? People just want to go home! …Most of the major breeding grounds are on these planes. We took the time to sanitize, we wiped down the seats, and we wore masks for nearly 24 hours straight. We were literally on 3 continents in 24 hours. What I don’t get is people coughing and sneezing on these planes and only about a quarter of people had masks. The airlines should have handed masks to everyone on those planes and make it mandatory that they wear them. Only half the flight attendants were wearing them!”

Gayle says Heathrow International [airport in London] was dead, it was 5 am, compared to the airport in Johannesburg which was “packed like sardines!” The two were fortunate to obtain N95 masks. “It puts a seal on your face and you can breathe, but difficult… I also remember that when we were going into South Africa they had sprayed the airplane. They never did that when we came back. Canadians are very lax.” Stuart adds that airline personnel in South Africa went up and down the aisles spraying aerosol disinfectant.

He continues, “A lot of Americans had a hell of a time getting home. We were the only Canadians. Some had 36-hour layover in Abu Dhabi and Dubai, and United Arab Emirates had been closed down to transit, no more. It’s bizarre out there. Being out there as opposed to here, we got CNN, the Italian or French or Spanish news, but no Canadian news.” Gayle interjects, “Thank God for the Internet or I wouldn’t have known, and thank God I had anxiety; I think that’s what pushed Stuart to get us out.”

The emotional moment was when they got on the Air Canada flight. “The Air Canada flight, the pilot delivered a beautiful message. I felt like tearing up. I felt immense pride in being a Canadian. He welcomed us back; it was a nice heartfelt message about being Canadian and that we were to have a nice ride home safely, noting that many of us had been through an ordeal and now was the time to relax; they were going to get us home safely.”

Once they got to Canada, Stuart and Gayle followed the strict guidelines requiring them to go directly home. The used the Park and Fly option, family members did their grocery shopping for them, and they went directly into lockdown once they arrived in Sturgeon Falls. Now that the two are home, Gayle jokes that she has the upstairs and Stuart has the downstairs. Their good humour prevails, the gentle ribbing, but you can hear in their voices how glad they are to have made it home safely.