Over 7,000 families have been served by the West Nipissing Food Bank this past year, and the organization not only reorganized under the leadership of president Ken Perrin, they also expanded their operations to include the new, highly successful Food Rescue program. Now the WN Food Bank is trying to raise funds, around $10,000, to purchase a walk-in fridge to accommodate the rescued food, while at the same time having to say good-bye to their president.

Well, not good-bye exactly, but Perrin is stepping away from the position to take a break. He’s been going full tilt, and he’s supposed to be retired. Perrin has been an inspirational force for the group, not only helping to reorganize the charity’s internal structure, but also creating partnerships with other organizations, and guiding the volunteers around him to take over the lead positions. As of December 31, he will step down as president, and current vice-president Carole Renaud will take the lead.

When the Tribune recently had an opportunity to sit down with Perrin and Renaud, the former had just made a special delivery to a housebound individual in an outlying West Nipissing community who was too shy to ask neighbours for help. This is not something the food bank does, but Perrin seems to have a knack for just wanting to respond to need, solving problems in ways that reduce waste, maintain dignity, and create community.

“It’s 16 months now that I’ve been doing it,” notes Perrin. “We basically started with nothing except we had people coming to visit us on a regular basis. There was no organization because it was all kept by one person. We had to start from scratch. We have a constitution now, we have 8 directors, treasurer, secretary, chair and vice-chair – we’ve got a full complement. We are audited. Everybody in the executive is aware of the financial situation – we are in better financial shape than before. We meet 8 times a year and will have an AGM in April. Carole Renaud is going to take over my job as interim chair until April. It took a long time, but the biggest thing this year is the Food Rescue.”

Perrin steps down, Renaud steps up for the Food Bank 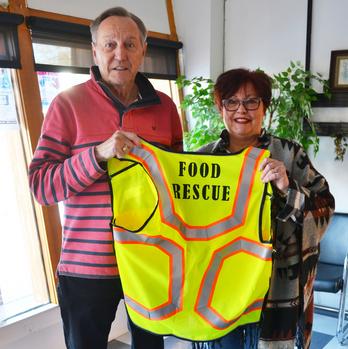