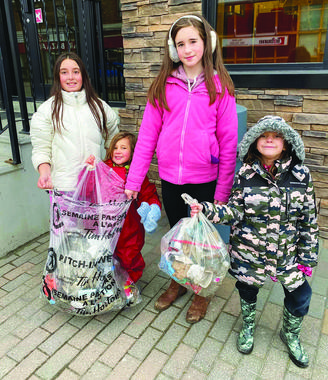 Christine Theoret has made picking up trash part of her family activities with her children and their friends. Left to right  Lucy & Chantal Theoret-Brazeau, (aged 10 and 4), Veronique  Leblanc (10), and Abygale Theoret-Brazeau (6).

The response to a local clean-up campaign through Pitch-In Canada has been no less than stellar so far, as over 100 persons, families and groups have responded to the call to snag and bag the trash in West Nipissing. Gayle Primeau made the effort to acquire 1000 bags from Pitch-In and distribute those to local volunteers who adopted a street or an area to clean. She is grateful for the incredible response - and also exhausted. “I was surprised! …I’ve been spending too much time on the phone, because usually in the afternoon I go for a walk, and I’ve been cutting down because people are coming to get the bags. Between answering the phone and getting to the bags, it’s been very busy – but I’m really happy. Even today I passed three extra spots that are already committed – it’s gone real well.”

What kind of garbage is lying out there on our streets? Well, everyone has been telling Gayle about the number of Tim Hortons cups, and now she is on a mission to see if they can be recycled. She has a counterpart in North Bay in the person of Harriet Madigan who went to the recycling plant and posted the recycling of Timmie’s trash. Gayle ponders, “Maybe that would help. Cigarette butts are still high on the list, and a lot of people in the outskirts are complaining of people dumping tires, emptying ashtrays… I tell them to send the pictures and I post them…  There’s a lot of illegal dumping; but Tim Hortons cups are most of the complaints.”

Nevertheless, Primeau feels very encouraged by the outpouring of local support. “My goal is 100 [locations] – last year we had 50.” On Sunday, she had already surpassed that goal, but was still calling for help, especially in the areas outside of Sturgeon Falls. “Sturgeon Falls is pretty well taken up; Evansville and Sandy Falls are good, Verner I had a few, Lavigne I had one, and in Cache Bay I’ve had two. … I’m still trying to get the outlying areas involved but it’s not catching on as much as it has in Sturgeon. In River Valley there’s one person, but I’ve sent a message to Rolly [WN councillor Larabie], and he’s going to see about getting the school involved. That’s another thing; I have St-Joseph, Jeunesse Active and this morning E.s.p. Nipissing Ouest.” The photos of all these efforts are proudly shown on the Sturgeon Falls Beautification Facebook page.

As for the heaviest sources of waste, according to Gayle, they are the fast food businesses, and she’s sent volunteers to go speak to those establishments about reinstalling garbage bins at the drive thru locations. Some had removed their bins. Gayle says her main volunteer, her husband Stuart Seville, was told that it was a corporate head office decision to remove the garbage bins, “but one of my other volunteers who called the Tim Hortons in North Bay was told… the individual Tim Hortons decide. So Stuart told them we were picking up a lot of their garbage and we’re fed up with it, and it doesn’t give a good image… MacDonald’s said that their reason for taking away the [garbage bin] was because people were dumping their stuff and it was a mess; the bees, whatever. But again it’s up to them to clean their area.”

Pitching in to clean up West Nipissing