Food bank volunteers, sporting their new hoodies, had lots of goodies to shelve during and after the Dec. 4 radiothon that brought in many donations. 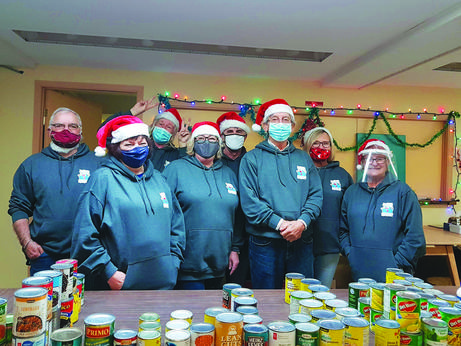 The West Nipissing Food Bank is ending the year on a high note after the annual Christmas fundraising radiothon, held on December 4th on the Moose FM, generated $11,188 in pledges and many boxes of food. Don Clendenning, food bank chair, said it was a joyful event and the results surprised him. “It went off better than expected. I anticipated because of COVID, and the time of year and everyone spending on Christmas and other fundraisers from different organization, that it would be a bit dry. But no, everyone came through – I think we had also about 135 pounds of food.”

He mentioned some major donations from the commercial sector, including $2,000 from the local Canadian Tire, delivered by owner Pierre Marchand, to be matched by a further $2,000 from corporate head office, and a $1,000 donation from Julie Aubin and her staff at Pharmacie Aubin Pharmacy.

Clendenning said the participation level really moved him. “What stood out? A lot of people coming in with smaller donations. We even had two people who are actually clients come in and donate… We had donations from $10 to up to $1000, right across the spectrum. It was really great.” That so many people participate makes it true community event, in Clendenning’s estimation. For him, the food bank acts as a catalyst to pull the community together. “For some reason it really does – ‘galvanizing’ is the word.” The effort to join in makes people feel part of the food bank, even if they never had to use the service themselves. The chair noted that they have some donors who pay on a monthly basis, and those regular contributions keep the food bank in the black.