Red scarves were tied to posts all over downtown West Nipissing on Nov. 20, highlighting AIDS Awareness Week. Shown above are some of the people who took part in the effort, volunteer knitters Marita Roffrey and Suzanne Louiseize, WN Mayor Joanne Savage, and WN Community Health Centre representative Céleste Auger-Proulx.Type your paragraph here. 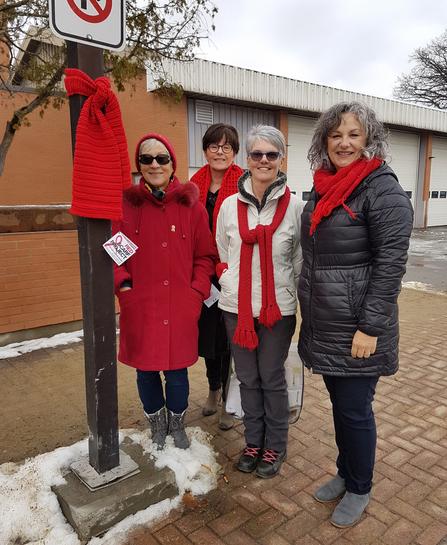 If people have noticed red scarves around the community lately, it’s no coincidence. The knitted scarves are a way to highlight AIDS Awareness Week November 24 to Dec. 1, and World Aids Day Nov. 28. The campaign is organized by the AIDS Committee of North Bay and Area (ACBNA), and for the second year in a row, the West Nipissing Community Health Centre’s knitting group has contributed to the Red Scarf Project. The initiative sees hundreds of red scarves knitted and crocheted by volunteers and then tied in the downtown area to raise awareness. The scarves, bearing HIV/AIDS awareness information, are then left for anyone to take.

The local knitting circle’s 23 scarves popped up at various spots throughout the community Nov. 20, when ACBNA’s Community Resource Coordinator Charlene Lalonde came to West Nipissing for a “scarf bomb” as a precursor to North Bay’s events.