West Nipissing knitters were busy this year, spinning more yarn than ever before to help raise HIV awareness through the AIDS Committee of North Bay and Area’s (ACNBA) Red Scarf Project.

The annual campaign looks to inform people of the importance of knowing their HIV status, while calling for the removal of barriers to accessing HIV testing in communities. That goal is accomplished by hanging red scarves, knit by volunteers, all around Sturgeon Falls.

Heavy snowfall meant this year’s event couldn’t coincide with World AIDS Day on Dec. 1. Instead, volunteers spent the morning of Dec. 3 tying the handknit symbols around downtown, after starting at the West Nipissing Community Health Centre with a few remarks.

“Although these are just red scarves, they represent a lot,” said Renée Vaillancourt, coordinator of community programs at the West Nipissing CHC. “It’s really great that we can bring this initiative here to West Nipissing because it creates a space where people can have a visual to start a dialogue around the issue.”

The Red Scarf Project originated in London and Stratford around the beginning of last decade. The scarves are meant to resemble a red ribbon – the symbol of HIV/AIDS awareness. The local event was started when former ACNBA Red Scarf Project manager Charlene Lalonde approached the West Nipissing Knitting Circle about taking part three years ago. Initially, all the scarves they donated were draped around North Bay, but last year, the initiative was extended to Sturgeon Falls. 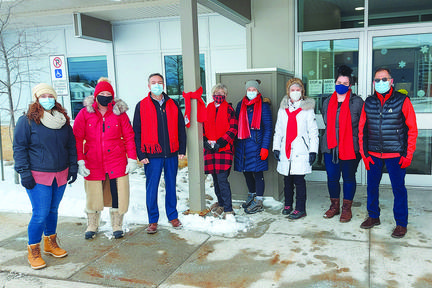 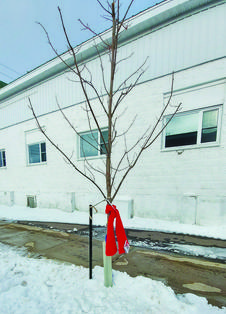 A scarf hangs at the memorial tree for Brenda Morrison near the Chevaliers de Colomb building. Morrison, who was a member of the West Nipissing Knitting Circle, passed away this July but was still able to knit several scarves that were hung this winter.