Proposed municipal regulations on camping trailers in West Nipissing have been a hotly debated topic during five public meetings held so far in River Valley, Sturgeon Falls, Verner, Lavigne and Field, with one remaining for Cache Bay. The community has reacted strongly to a possible bylaw, with both proponents and detractors voicing strong opinions. Some property owners want more stringent regulations, complaining about the proliferation of trailers on residential property with no proper oversight over waste disposal, noise and building code infractions. Others say the move is a tax grab and will undermine the rights of people to use their private property as they see fit.

Municipal CAO Jay Barbeau acted as facilitator at each meeting, explaining that the town was asking for public input to gauge the concerns of citizens before drafting and accepting any proposed bylaw.

So far, the meetings revealed unanimous agreement that environmental considerations need to be addressed, with zero tolerance for dumping of wastewater in or near waterways. However, there were varied opinions on limiting the number of trailers on a property and imposing registration fees. In River Valley, around 75 people showed up at the Club d’age d’or and were generally against registration of campers, whereas in Sturgeon Falls, where about 35 people showed up, there was general support for a one-time registration fee of about $50. In Verner, the crowd of 55 people seemed to be in favour of an annual fee to support the hiring of adequate staff to check that camping trailers were compliant with environmental practices, with the possibility of some of that fee go into an environmental fund. 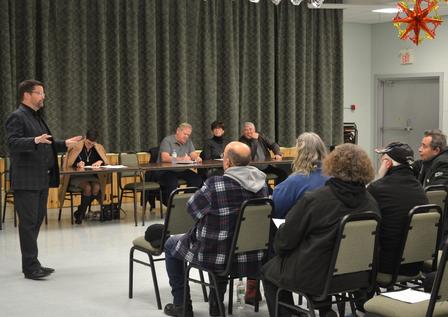