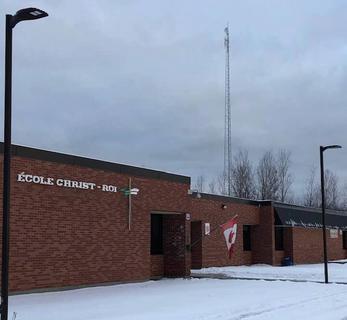 It’s great news for the community of River Valley and École Christ-Roi, who are finally getting reliable Internet delivery installed for the school, with additional benefits to the larger community, after years of lobbying. WN municipal councillor Rolly Larabie, who represents that area and is himself a resident of River Valley, is ecstatic about the news and looks forward to the final pieces being put in place so the children of his community can have the same school Internet access as other children in Ontario. He credits the persistence of the students themselves. “All credit needs to go to those kids,” he lauds, recalling how they made a video showing students getting up on their desks to capture a “hot spot”, sending it to elected officials to get their support.

Larabie also praises federal MP Marc Serré’s continual efforts on the file, although education is a provincial matter, and MPP John Vanthof raising the issue in the Ontario Legislature to highlight the plight of River Valley and other small rural communities that suffer for poor Internet access. “I always kept in touch with Marc Serré about the Internet because he came to the school – so now he’s promised he’s going to get us cell service now! … I spoke to [MPP] John Vanthof at Remembrance Day 2018 about internet in River Valley and he said he was going to mention it in Legislature (…), and he did, and that brought the matter to the attention [of the government of Ontario].”

The school has had a tower put up by Northern Rural Net, a company based out of Bancroft. Asked what took so long, Larabie sums it up very simply: “Money”. According to Larabie, funding was allocated to the school board, Conseil scolaire catholique Franco-Nord, for the project, though he is not aware of all the details. The board itself says it is waiting for all the agreement details before releasing a public statement, and Ecole Christ-Roi principal Frances Mageau is holding off on celebrating until everything is running smoothly, she says.

Larabie predicts that it will be a couple of weeks, and assures things are moving forward. “It was kind of a surprise. I keep up with the (Franco-Nord) IT tech and he keeps me posted… He lives in Sturgeon and he told me it was a go.”

He adds that things are looking up for River Valley at large as well.  “So this company, the main goal was to supply the school, but they are offering it to residents, the ones who are within the tower range. If there’s a cluster of homes in one area and they can’t get [it] because there’s trees in the line, they will set up a secondary tower or clear the trees to supply these homes.”