Timiskaming-Cochrane now has a full complement of candidates to choose from in the upcoming June 7 provincial elections. Three candidates represent the major parties and three candidates are standing for parties which currently have no seats in the provincial Legislature. The Tribune conducted interviews and presents three of the candidates in this edition.

Incumbent John Vanthof (ONDP) will naturally seek to retain his seat in the Legislature and has had his nomination secured since last year. It took some time for the other parties to field candidates. Brian Johnson of Kirkland Lake was posted as the Liberal candidate on the provincial website only this week. Attempts to personally contact Mr. Johnson were not successful, but the Tribune will attempt to reach him and profile him in the next issue. The Progressive Conservative candidate, Margaret Williams, declared her candidacy mid-April when she was acclaimed into the position. Shawn Poirier of North Cobalt is one of 10 Northern Ontario Party (NOP) candidates running across the north. The party is the successor of the Northern Ontario Heritage Party and is strictly focussed on northern concerns. The Green Party of Ontario (GPO) is fielding a parachute candidate Casey Lalonde, in order to provide the option on the ballot. Ms. Lalonde ran in Sudbury in a previous campaign. The Tribune did not interview Ms. Lalonde as it was unclear at press time whether she would be actively campaigning in Timiskaming-Cochrane. Also running is Lawrence Schnarr of the Libertarian Party. Their website includes no information on this candidate, and no contact number.

The Temiskaming Shores Chamber of Commerce held a candidates’ debate on Tuesday, May 22, however only Vanthof and Poirier took part. Organizers said Williams and Lalonde declined, and they couldn’t even find contact information for Johnson or Schnarr. The West Nipissing Chamber of Commerce is not planning a debate in this community, preferring to focus its attention on planning a municipal elections debate ahead of the October 22 municipal election.

Shawn Poirier of North Cobalt has just completed a tour of West Nipissing from Sturgeon Falls to Lavigne and Monetville over to Markstay, to familiarize area residents with his party, the Northern Ontario Party - NOP (formerly the Northern Ontario Heritage Party-NOHP). He is the candidate for Timiskaming-Cochrane, and he wants your vote.

“We walked the streets of Sturgeon Falls, talking to small businesses and going door to door. The reaction was very positive. Some still get us confused with the NDP – which is properly ONDP,” said Poirier. His party’s acronym is NOP, but he’s very positive towards his New Democrat counterpart, John Vanthof. “We’re friends. I used to drive a milk truck and pick up milk at his farm.”

Poirier was born in Kirkland Lake in 1977 and grew up in New Liskeard from age 7. He’s a truck driver with Grant Transport out of New Liskeard, which he says gives him a bird’s eye view of what’s happening in the north. “I’ve driven up and down our nice safe roads,” he said somewhat tongue-in-cheek. “You tend to see the economy slowing down, shutting down in northern Ontario. I used to be a milk truck driver and seeing dairy farms shutting down and processing plants coming to a stop, that’s hurtful for northern Ontario. Now I drive wood chips and sawdust, and even with sawmills… the only place we go to is Espanola, when we used to have Smooth Rock Falls and Iroquois Falls… When I questioned Trevor Hall (party leader) when he started the NOHP movement …and met Gino Chitaroni from Cobalt, he ran under the NOHP in 2014, they asked me to take over this riding here… We re-branded it to NOP, new colours… All of us are hard working people. I’m on a leave of absence from the trucking industry to pursue this new career. …Everybody here is from working poor to down below; some are retired on very low pension. We’re up to 10 candidates across northern Ontario.”

In other words, the party has no money, is operating on a shoestring, and Shawn’s wife Patricia doubles as his Director of Finance.

Considering the lack of resources, what drives people like Shawn Poirier to run a campaign? “Going around across the riding since 2016, my vision is to get the confidence of people back in government. This is the government of Ontario, which is your government – not the NOP government, not the Liberal government, it’s your government, and in the NOP we think like a franchise. We have the executive board which is the NOP, then we have NOP Timiskaming-Cochrane, that’s my franchise. 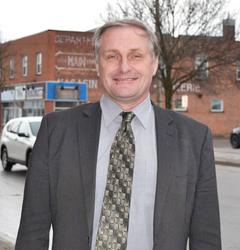 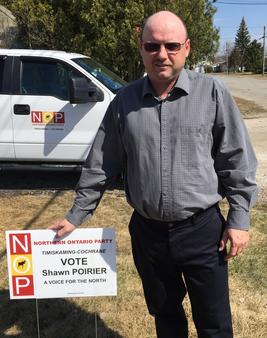 John Vanthof stopped in Sturgeon Falls early Friday morning, May 4th, on his way to kick off the Northern Campaign for the NDP in this year’s provincial elections. He is, of course, the candidate and incumbent for Timiskaming-Cochrane, having served the area since 2011, and he is the Finance Critic for his party - so he not only knows his way around the northern block, the former dairy farmer from Temiskaming Shores also knows how to count the beans. “There are specific issues that are prevalent across the province, but we have some big issues in northern Ontario,” he noted, and then proceeded to list them.

Healthcare. “Because our population isn’t growing as in the south and funding is based on population … we have to make sure hospitals in the north have adequate funds to do the job they have to do.” The NDP northern Ontario plan includes changing the funding formula to make sure northern regional and community hospitals can provide adequate health care.

On the jobs front, Vanthof went after hydro rates, saying that the Fair Hydro Plan took a $26-billion operating loan to subsidize hydro bills, but that money still has to be paid at the end of the day. “The debt is going to be borne by ratepayers,” he said, adding the NDP plan to use the dividends from the remaining 40% public ownership and start buying Hydro One back.  “Selling Hydro One was the biggest mistake Wynne ever made. …Once we get control, we can start to make decisions again. The CEO salary increased by 8-fold – over $6 million. …By comparison the CEO of Hydro Manitoba gets $275K. …A public company will have a different focus than a private company.”

The second part of the NDP plan is to equalize delivery charges across the province, as in Quebec and Manitoba, which should eliminate those bills where the delivery charges are higher than the actual usage. “You still have delivery charges but everyone pays the same – if you use 500 kilowatts in River Valley or in downtown Toronto, you pay the same. In rural Ontario, it will make a huge difference.”

Margaret Williams has been acclaimed as the Progressive Conservative candidate for the provincial riding of Timiskaming-Cochrane. A resident of Field, she and her husband have a home on Bain Lake. Williams was acclaimed at the nomination meeting on April 11 in Kirkland Lake, where it was reported only three people attended. In a statement released on April 12, Ontario PC Leader Doug Ford lauded her as a community safety advocate with a background including advocacy for MADD Canada.

Williams provided a profile noting she is a stay-at-home mother of five children, has over 20 years experience as a community leader in various positions including president of her Parent Teacher Association, and founder/president of two MADD Canada Chapters, activities for which she received both volunteer service and civic leaderships awards. Her backgrounder indicates she has a “deep seeded passion for advocating for the citizens of her home riding.”

In her emailed response to The Tribune, Williams wrote “I feel very humbled and honoured to have been acclaimed as the PC Candidate for the riding of Timiskaming-Cochrane. I look forward to working with Team Ford as we address some very serious concerns, including issues regarding health care, taxes and hydro. The north has been ignored long enough. It’s time to listen to the taxpayers, the families, the small business owners and of course the amazing front line workers.”

​“Doug Ford has a great plan for the people of Ontario and we will be rolling it out, piece by piece over the coming weeks. We are going to be offering the voters a clear choice of either: Four more years of the Liberals as they continue to waste the taxpayer’s money, raise their taxes and hydro rates while driving jobs away from Ontario OR a government that will bring relief to families and make Ontario a place that is open for business again.” 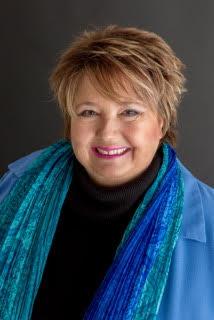 NOP candidate says he will be a watchdog for the north