Police with machine guns and a canine unit swarmed the area around Cache Bay Road, Sabourin Raod, Hwy 64, Sandhill Road and Dufferin Road on the evening of March 18, evidently looking for an elusive suspect. While the residents in the area were not advised to lock their doors or take extra precautions, several expressed concern over the situation on social media, as word spread that a manhunt was on after a stabbing incident in Sturgeon Falls.

The OPP released information the following day, stating that members of the Nipissing West Detachment had responded to an “assault incident” at a residence in Sturgeon Falls.

A 22-year-old male victim, from Sturgeon Falls, suffered stab wounds to his upper body, which are serious but non-life threatening.

The other victim, a 29-year-old female, also from Sturgeon Falls, was pepper sprayed and her injuries are minor.

As a result of the investigation, two people were subsequently arrested and an arrest warrant was obtained for the third person.

On the morning of March 19, the third suspect was arrested in Sturgeon Falls.

Goulais and Shank were taken into custody pending a bail hearing set for March 19 in North Bay, while Leblanc was released by way of an Undertaking and will appear at the Ontario Court of Justice on July 2, 2020 in Sturgeon Falls. 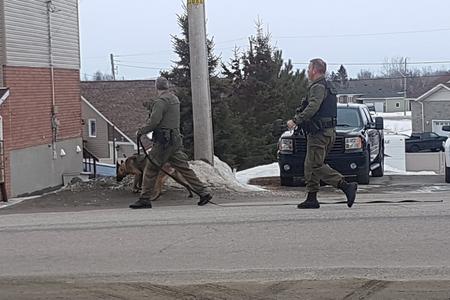