Hundreds of Franco-Cité students and volunteers collected non-perishable goods from homes across West Nipissing then formed a human chain to get the nearly 20,000 lbs of food to the local food bank.

For nearly 20 years, the Franco-Cité Patriotes have been demonstrating the true meaning of Thanksgiving by helping the local food bank in a very big way. This year marked the 19th “Une canne ça dépanne” food drive, which sees students and many volunteers drive throughout the community to collect food – enough to stock up the food bank for nearly a year. Once again, the school collected an incredible 19,585 lbs of non-perishables and over $1,200 in monetary donations.

The food was collected from Sturgeon Falls to Warren on Oct. 9 and brought to the high school to be sorted and distributed. Thursday afternoon, as tradition dictates, a long human chain was formed from the high school to the corner of John St., with the food being passed hand-to-hand to fill a waiting trailer. After the trailer is filled, a parade goes through town as the Patriotes make their way to the food bank, at the corner of Nipissing and Third, to drop off the bounty.

Despite nearly 20 years of tradition, Franco-Cité teacher Yves Lafrenière says that there’s always room for some fine-tuning. “In terms of improving the event, this year we had our student band play in a big trailer and that was amazing! Of course we also looked at the zones for food pick-up as well. It’s tricky to try and comb the whole area... we go from Field to Warren and everywhere in between, so there is a ton of work by the students as well as many volunteer parents,” notes the teacher. 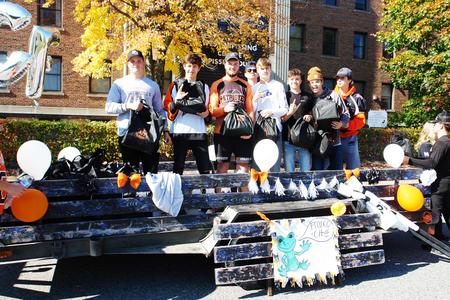