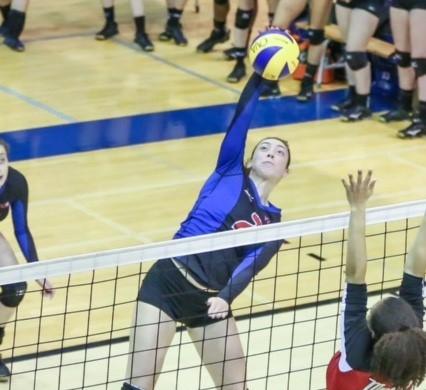 West Nipissing’s own Alyssa Lafantaisie will be attending the University of Waterloo on an athletics scholarship next September. Photo courtesy of the Ontario Volleyball Association.

A 17-year-old senior at Franco-Cité is now the newest recruit for the University of Waterloo (UoW) volleyball team. Alyssa Lafantaisie, born and raised in West Nipissing, will be leaving for Waterloo in August as she enters her first training camp as a member of the team, an honour she has worked hard for over the last several years.

“I’m really excited,” beams the young athlete. “The Waterloo coach came and scouted another girl who was on my team last year, and he saw me play and asked me to attend one of his summer camps that August. So I went... and he asked me to join the team.”
It is a pretty big deal, considering she was cut from her elementary school team.

And the rest, as they say, is history. Lafantaisie played on her school teams every year after that, as well as with the West Nipissing Wild. When the Wild program folded three years ago, she brought her talents to North Bay’s Vision Volleyball Club, where she’s been playing since.

There is no doubt she puts in hard work and commitment. Three days a week, Lafantaisie wakes up at 4:45 a.m. and drives to North Bay to work with her coaches. After she’s done her weight lifting, she returns to Sturgeon Falls to get ready for school. As soon as the school bell rings, she either returns to North Bay for practice, or has a practice with her high school team.