Wayne LeBelle was a person who collected the stories, the memories, and the history of his community, sharing them through his books so that the elements that define us as a community would not be forgotten. The town of Field, where LeBelle made his home with his family, returned the sentiment on Monday, August 12th, with the unveiling of a plaque at the riverside park commemorating the author and historian’s commitment to local history. Wayne LeBelle passed away on Sept 7, 2017. His family and friends, as well as local dignitaries, came together for both the unveiling of the plaque and the dedication of a park bench at the site.

Former town councillor Guilles Tessier, who had represented the community of Field and started the process following LeBelle’s funeral, was also in attendance. “Wayne did a lot for this town and he is missed; people feel the loss,” said Tessier. “I had a chat with Carole [Marion, LeBelle’s wife] and his kids, and they felt ‘What a nice way to remember our dad’. I had the utmost respect for Wayne. This is where his heart was, Field, so this makes me totally happy.” He added that when the idea was initiated, everyone got on board immediately.

Ken Paquette, representing both the Chevaliers de Colomb of Field and the Field Recreation and Economic Development (FRED) committee, was MC for the event. WN Mayor Joanne Savage said a few words on behalf of the municipality, noting that for many it was an emotional event. “We’re grateful that the community partners came together to recognize a person who contributed in so many ways to all the community of West Nipissing. He was a politician in Field, a member of FRED, his passion for history, the books he wrote… he left us a big treasure… We are honouring Wayne today and to make sure everyone who passes by can stop and have part of the history.”

The historian’s turn to be remembered 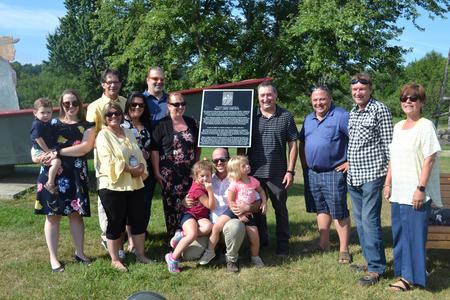