After months of dealing with complaints regarding discarded needles in public areas, and on the advice of the local centre for addictions counseling, Alliance Centre, the municipality installed a community sharps bin in downtown Sturgeon Falls on January 10. The aim is to encourage users to discard their needles responsibly, thus protecting the public from infectious diseases, such as HIV and Hepatitis C, and possible drug contamination. The sharps kiosk, which can hold approx. 4100 sharps, is on the corner of Main and Queen Streets.

Members of the Ontario Provincial Police, the municipality, as well as the North Bay Parry Sound District Health Unit were on-hand for the launch of the bin.

Katharine O’Connell, Community Health Promoter, and Cathy-Menzies-Boulé, Executive Director for the Health Unit, as well as Alliance Centre’s Michael Taylor and WN Mayor Joanne Savage were pleased to see the bin in place, citing it as a big step in harm reduction for the community. Given the toxicity of some of the substances now circulating, including potentially deadly fentanyl and carfentanil, the danger of having used needles littering public areas is more worrisome than ever. 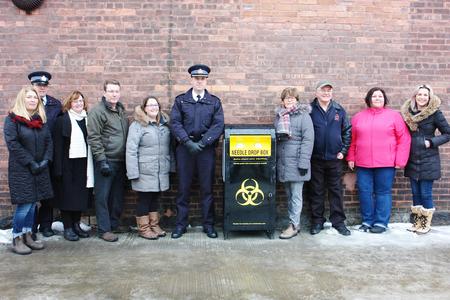