Verner residents “fed up” with brown water, but no quick fix is in sight

When they turn on their taps, residents of Verner are getting brown water that is less than appetizing to drink, and which is discolouring their clothing in the washing machine. During the last week, many have been posting online some rather extreme photos of tap water the colour of coffee, and expressing anger at this long-lasting situation that seems to have no easy fix.

While the discolouration is not a health concern according to officials, those assurances are no consolation for the local population that has been bathing and washing clothes in brown water that stains, and no one wants to drink it even though it has been deemed safe. In response, the town began handing out cases of bottled water at the local fire department, first limiting this to two cases at a time, then increasing the limit to four.

Faced with a barrage of complaints, WN Council called a special meeting for Tuesday, August 6th in an effort to find short term and long-term solutions. About 10 residents of Verner attended, expressing anger at the lack of resolution.

Mayor Joanne Savage called on CAO Jay Barbeau to give an overview, along with Peter Ming, Manager of Water / Waste Water Operations for the municipality. Barbeau explained that the Verner operation is controlled by the Ontario Clean Water Agency (OCWA), which has been working with the Ministry of the Environment. “We, the municipality own the system but we have contracted it out; the legal authority for the system is OCWA… They have the final authority to deal with the MoE in how they handle the situation.”

Carole Cousineau of Verner posted these pictures of the water in her washer and toilet bowl, taken August 5th. 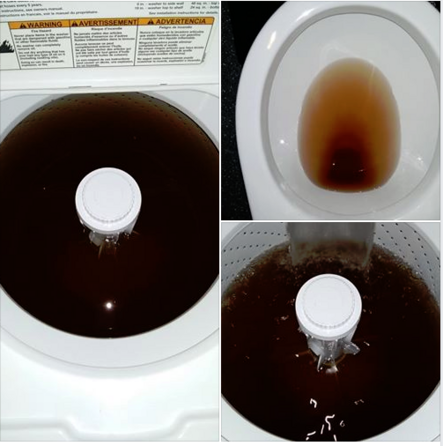