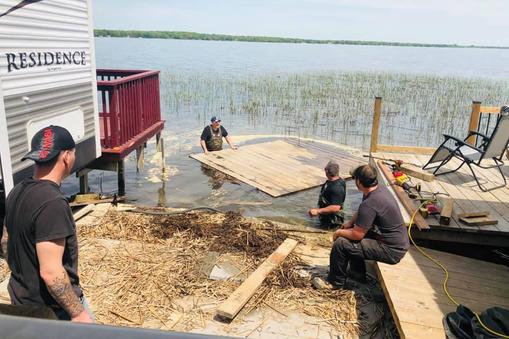 Many residents face weeks of clean-up and repairs after recent flooing left docks, yards, structures and even homes badly damaged.

After weeks of fighting and fearing the rising waters along local shorelines, waterfront residents can finally see a light at the end of a long, dark tunnel as Mother Nature provides some much-needed respite from prolonged, heavy rain and winds that had lakes and rivers overtaking the lands. After flooding countless properties and roads, the water has receded but many people’s yards and shorelines have suffered major damage and will take weeks to clean and repair.

On June 10, WN Mayor Joanne Savage lifted the Emergency Declaration for the Municipality of West Nipissing, which had been issued May 9. Over the last few days, Lake Nipissing reached an average water level of 196.3 m, still high but not a threat. Conditions are also expected to improve more still in the coming days, but the collective sigh of relief will be brief as the focus turns to clean-up efforts.

While several roads were washed out, particularly in the Lavigne area, Hillman Road and Avenue du Lac were re-opened Monday, though others will take more time to drain and repair. The municipality also reopened some public boat launches, but its docks remain closed.

“For safety reasons, boat launch availability is still limited. The secondary boat launch in Cache Bay and the launch at Minnehaha Bay remain available for the public. Boaters are urged to navigate respectfully to limit wake and to be cautious of floating debris,” the municipality wrote in a release issued on June 10.