West Nipissing is striking a deal to acquire almost 30 acres of prime land in the heart of Sturgeon Falls as Weyerhaeuser, the last owner of the former mill, has agreed to transfer the brownfield lands to the municipality. The deal comes as a result of a renewed effort by resident Stuart Seville, vice-president of the WN Chamber of Commerce, related CAO Jay Barbeau at the September 1st municipal council meeting.

While the municipality had been in negotiations in the past, the effort slid into a stuck-drawer portfolio as more pressing issues arose. Seville, along with wife Gayle Primeau, have been making a concerted effort as private citizens to renew Sturgeon Falls. While she has been busy with the beautification committee and local artists to improve the downtown, Seville has undertaken a waterfront reclamation initiative focused on lakefront at the former Dutrisac Cottages on Lake Nipissing and the Weyerhaeuser brownfield alongside the Sturgeon River, in an effort to open both areas to the public. Seville initiated his own process and, within two weeks, got buy-in from both the west coast corporation and West Nipissing administrative staff, who quickly re-opened the portfolio. He says that brownfield lands will be transferred to the municipality at less than market value, and was told on Friday, August 25, by town CAO Jay Barbeau, “You can tell [The Tribune] we have the deal on the table right now. It’s going to happen.”

“When we first came shopping to Sturgeon Falls to buy a house, we were shocked to find there was so little access to the waterfront, virtually nothing, except Minnehaha Bay, which is not really access – no beach…. We were shocked and stunned, to tell the truth,” says Seville. Since moving here, he has often heard stories of waterfront lands being sold off, resulting in only the wealthy and few having access to the lake. “It’s not right.”  Seville heard about both properties, Dutrisac and Weyerhaeuser, being wrapped up in red tape and lack of agreement, and decided to take the plunge to try to connect with the principals. 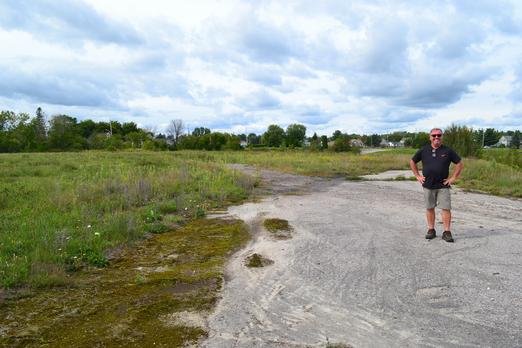 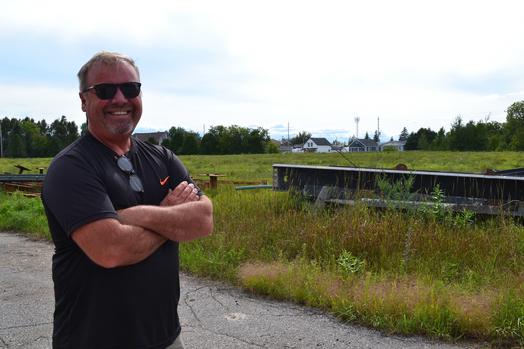 Stuart Seville standing in the centre of  approximately 30 acres of brownfield left vacant by former mill owner Weyerhauser. West Nipissing is negotiating the purchase of the property.