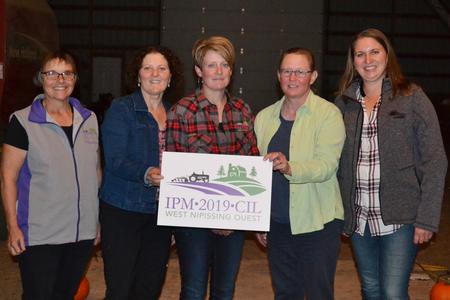 Women sow the seeds of success

Moderator Pierrette Desrochers, the local Agriculture Development Officer with OMAFRA, introduced each of the women with a lengthy list of accomplishments. “The goal of having Women in Agriculture panels… is to talk with one another and discuss successes, struggles, provide advice and share experiences as a woman in the Ag industry… We get to build each other up.”

Josée Séguin, operating a fifth generation farm (est.1912) with 400 acres, 200 cattle and 100 milking cows, is also the only delegate of Gaylea Foods Cooperative from Northern Ontario, chair of the local dairy producers committee, manager of her sons’ hockey team, and accomplished accordion player. She said her grandparents inspired her to get into farming. “My grandfather …bought the farm with grandma in 1950, then after that my dad along with his brother Jean-Guy – they were always optimistic and they loved the challenge. It’s something in the Séguin family... continuing the tradition… I’m proud to say that the only three dairy farms left in Noëlville are owned by the Séguin family.”

She added that more women are on agricultural boards than ever. “It’s encouraging; when I started as a delegate, I was the first woman in Zone 4, north and east, and now there are probably 5 women in zone 4… More women taking over their parents’ farm… 25 years ago there was nobody taking over a farm as a woman.”

Diane Dechatelets and her husband Michel purchased their farm from his parents in 1981. There were two acres of strawberries and two acres of sweet corn, which have now grown to over 250 acres of fruits and veggies. Diane raised four boys on the farm, has a farm bakery and hosts school tours. She sits on the West Nipissing Advisory committee, is secretary of the WNES Agricultural Supports Project, and is an official for provincial and Canadian wrestling associations. She was asked what advice she would give to women starting a career in agriculture, what skills are needed.

The speakers at the Women in Agriculture event Sept. 19 gave a fascinating look at farm life from their perspective. Shown are Janet Parsons, Diane Deschâtelets, Josée Séguin, Tracy Séguin and Chantal Lewington.